With his oversized Afro and razored sideburns, Alex Cuba cuts a cool figure, a cross between ’70s soul man and stylish rocker. It’s a look that has been attracting attention ever since the musician, born Alexis Puentes in Artemisa, an hour west of Havana, first moved to Canada.

But while Cuba’s appearance has turned heads—especially in the small, northern British Columbia town of Smithers where he settled with his Canadian wife, Sarah Goodacre—his music, an infectious blend of rock, reggae, soul, funk and traditional Cuban music, has been grabbing ears and winning awards.

Cuba’s first two Spanish albums, Humo de Tabaco and Agua del Pozo, won Juno Awards for World Music Album of the Year. His self-titled third disc, which includes his first English song, “If You Give Me Love,” earned a Grammy nomination for Best Latin Pop Album and won him the Best New Artist award at the Latin Grammys.

His two most recent albums, recorded in Victoria with co-producer Joby Baker and in Havana at the famed Egrem Studios, home of the legendary Buena Vista Social Club, have been hailed as “new wave” Cuban music and made him a favourite on CBC and, increasingly, on Latin radio in the United States. His sales on iTunes, meanwhile, have made him a breakout artist in the digital world.

As a songwriter, Cuba has been steadily winning the respect of his Canadian peers. To date, he has collaborated with Ron Sexsmith, Jim Cuddy and Nelly Furtado. For his next album, Cuba plans to include three new songs in English, an essential step in his crossover dreams.

“There are two worlds inside of me, one Cuban and the other Canadian,” explains the affable singer-songwriter. “I’m proud to be Cuban, but I’m also proud to be Canadian. It’s important for me to sing in English because I live here.” Then, employing the sort poetic analogy found in his songs, he added: “I’m on a journey of fusing two seeds, the seed of the mango and the seed of an apple, to make a new kind of tree.” 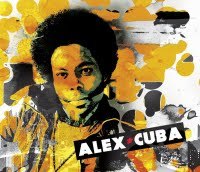 Cuba’s journey in music began at the age of four when he appeared on Cuban national television, performing in a youth group directed by his father, Cuban guitarist and music teacher Valentin Puentes. Playing bass, he toured Canada with his dad’s band in 1995, when he met his future wife. After emigrating here four years later with his twin brother, Adonis, the two formed the Puentes Brothers duo and released a Juno-nominated album, Morumba Cubana.

He credits Canada—and several “magical moments”—with making him a singer. Two months after arriving in Victoria, he entered and won a competition to take part in a three-day workshop at a local music conference, culminating in a performance with the other winners. Although intending at first to play only bass, he was encouraged to switch to guitar and sing by two conference instructors, Salvador Ferreras and Randy Raine-Reusch. Observes Cuba: “If it wasn’t for Sal and Randy and the response I got from the audience, I might still be just a bassist without a voice.”

Abandoning the big-band approach of most Latin music, Cuba adopted a spare, acoustic sound that accentuated his vocals while still adhering to a strong rhythmic groove. Humo de Tabaco, featuring the duet with Sexsmith, “Lo Mismo Que Yo (If Only),” struck an instant chord with Latin and world music fans. When the album was launched at Toronto’s Lula Lounge in 2005, Andres Mendoza, then working for EMI Music Canada, was in the audience. “I was blown away by his talent, his stage presence, his charisma and his lyrical quality,” recalls the Chilean-born Mendoza. “I was like, ‘this guy is a star.’” Two years later, Mendoza left EMI and began managing him.

Cuba’s next magical moment came at the 2008 Junos in Calgary. While taking part in SOCAN’s Songwriters Circle with Joel Plaskett, Serena Ryder and others, he recognized Cuddy in the audience and spontaneously sang a verse of Blue Rodeo’s “Bad Timing” in Spanish. The crowd loved it. Cuba then joined Blue Rodeo onstage at a Juno after-party and reprised his part in “Bad Timing,” a song he recorded in the summer with the group as “Arrepentido.”

That fall, Cuba was heavily courted in the U.S. by EMI’s Blue Note Records, which wanted to release Agua del Pozo. After eight months of negotiation, artist and label cordially parted ways over the artistic vision for Cuba’s third album: Blue Note had some big-name producers in mind, while Cuba wanted to stick with Baker. “I told them ‘I believe in my sound and don’t see any need to change it,’” he says. All of Cuba’s albums have been released on Caracol, the independent label he owns with his wife, and are distributed in the U.S. and Canada through EMI.

The indie approach has paid off. Agua del Pozo sold well on the strength of four iTunes singles of the week, including the soul-pop hit “Si Pero No (Yes and No).” The infectious song, about the paradoxical nature of desire, boasts a catchy chorus on which Cuba invariably gets his audience singing along in Spanish. Other numbers include “Y Que Bongo (What a Bongo),” about the musical inspiration of his hometown of Artemisa that has a percussive Latin reggae vibe reminiscent of Santana’s classic “Oye Como Va.”

The connection with Furtado came through two of her musicians, guitarist James Bryan (Philosopher Kings, Prozzäk) and percussionist Daniel Stone, who recommended Cuba to her when she expressed interest in making a Latin recording. Furtado, Cuba and Bryan co-wrote nine Spanish songs, six of which appeared on her Mi Plan album, including the title track, a duet between Furtado and Cuba, and “Manos al Aire,” a number one hit single. Mi Plan topped the U.S. Latin music charts and won Furtado a Latin Grammy for Best Female Pop Vocal Album.

Juggling collaborations with Furtado and his own tour dates, Cuba finished up his third album at Baker’s studio in Victoria. Once again, he and his co-producer, whom he describes as his “musical soul mate,” mixed genres and tempos. Along with danceable numbers like the reggae-flavored “Directo (Directly)” and the Cuban funk-rocker “Caballo (Horse),” the album includes such melodic ballads as “Tierra Colora (Red Earth)” and “Contradicciones (Contradictions),” a moving song of faith.

“I have to make a conscious effort to write upbeat songs,” admits Cuba, “because my preference is to write slow ballads that compliment my voice. I’m very influenced by the romantic side of Cuban music and grew up listening to a lot of ballads, not only from Cuban artists like Silvio Rodriquez and Pablo Milanés but singers from Spain and Mexico as well.”

Still, with his bass background and love of rhythmic groove, the singer-songwriter’s music will always be inherently funky. Cuba has recently co-written a number of songs with Nicaraguan salsa artist Luis Enrique, which will appear on each of their next album. “He found me on MySpace,” Cuba says of Enrique, “and emailed to say he was a big fan of my music. (Panamanian singer) Rubén Blades found me the same way and wrote to tell me how much he liked my song “Vampiro (Vampire)” on Agua del Pozo. I couldn’t believe it because these guys are big stars in the Latin world.”

Cuba is fast becoming one himself. Along with his Grammy breakthroughs, he has been making successful forays into the Latin market. With Mendoza, he attended last year’s Billboard Latin Music Conference in Puerto Rico, where he took part in BMI’s “How I Wrote that Song” panel. While other artists sang to recorded tracks, Cuba, when it came to his turn, accompanied himself on guitar and brought the house down with several stirring performances of his songs. Says Mendoza: “He’s a real musician and delivers what he does is really pure way, even in that industry-type environment. There are not many people in Latin music singing in a soulful style. It really helps him connect with people, even those that don’t speak Spanish.”

Above all, Cuba says his success is a direct result of his happy life in Canada, Afro and all. From his base in tiny Smithers, where he and Sarah are raising their three children, he’s able to quietly plan his career and focus on songwriting. “Canada has allowed me to play many different kinds of music and I’ve been accepted for my diversity,” says Cuba. “I’m very grateful for that, because I know that I can go in any direction I want. As long as what you’re doing what comes naturally to you, that’s all that matters.”

Does he ever miss the warmer climate of his homeland? “Not a bit,” Cuba insists. “I was asthmatic when I was growing up. Since coming to Canada, my asthma has been completely cured. I haven’t had an attack for 11 years now. That’s just another benefit of my immigration,” he adds with a laugh. “I didn’t come here for any fake reason. I came for the most universal reason in the world—love—and my music reflects that.”

Nicholas Jennings is a Toronto-based journalist, author and TV producer who specializes in music.