No single artist is more closely connected to Massey Hall than Gordon Lightfoot. Beginning in 1951 and ’52, as a pre-teen with his first place wins in two Kiwanis Festival singing competitions, Lightfoot has made over 165 appearances (and counting) on its hallowed stage. The Orillia native returned in ’55 with his Teen Timers quartet to take second prize in a barbershop singing contest. Lightfoot’s first concert as a featured singer-songwriter came in March 1967, which one critic described as a “country-and-Lightfoot parade of Canadiana.” 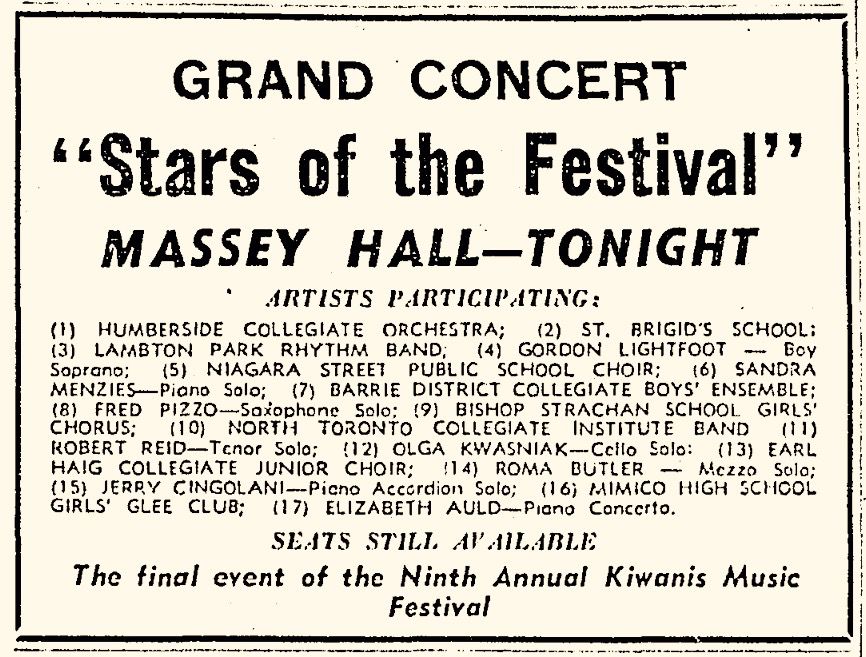 Two years later, Canada’s folk star recorded his first live album there, Sunday Concert (his second was 2012’s All Live, drawn from material recorded at Massey between 1998 and 2001). The demand to see Lightfoot kept growing to the point where, in 1977, the “Sundown” singer sold out seven consecutive nights and the Toronto Symphony (then resident at Massey) was forced to book its vacation around Lightfoot’s annual appearances. His mother Jessie never missed one of his Massey concerts and superfan Ron Sexsmith hasn’t missed one since 1987. What does Massey Hall mean to Lightfoot? “It’s the most important engagement of the year,” he once said. “Playing Massey Hall is like Christmas to me. I’m home, I get to see my family, all my friends. I love the place.” His legions of fans love hearing him there too. That’s why they call it the House of Gord.