C.W. Stoneking is the best blues artist you’ve never heard, a distinctly white performer (dressed head-to-toe in white as well) from the far northern reaches of Australia, a man who inhabits the sounds and vernacular of traditional music so convincingly it’s as if he’s been mysteriously transported from the distant past and landed smack dab in the middle of the bright and shiny present. He slicks his hair down with Brylcreem, plays old-time blues, country and calypso on a 1930s Dobro or 1950s Gretsch electric, uses only vintage tube amplifiers and spouts antiquated expressions as he tells his fabulously tall tales of shipwrecks, voodoo and talking lions. He’s a cross between carnival barker, vaudeville comic and living embodiment of Harry Smith’s weird old Anthology of American Folk Music. 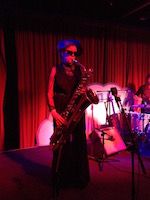 The wonder from Down Under has three fine recordings to his credit, King Hokum, Jungle Blues and the brand spanking new Gon’ Boogaloo. Each takes the listener on a wild journey into a fantastical world full of hokum, flimflam and chicanery where Charley Patton and Wilmouth Houdini rub shoulders and bump backsides with Memphis Minnie and Geeshie Wiley.

In one of his far-fetched narratives he tells of a lying good-for-nuthin’ scoundrel named Samuel Jacob Jehosophat Jellyroll Johnson (“any name that be fittin’ his present situation”).  Stoneking shares what he’s learned “through years of investigation, misinformation and inebriation” with this account: “While servin’ in the Armed Forces, Samuel was wounded at the battle of Hastings. That was back round 1066, uh, in the mornin’, after which he was discharged with the high distinction of never havin’ enlisted. The memories of war scarred Samuel the rest of his life, because he remembered nothing, and though he often raised toasts to his fallen, bank balances, he never taken a drink of liquor the rest of his life—that he paid for.” 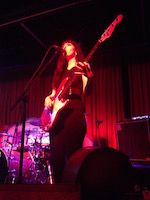 Having explored acoustic sounds on King Hokum and Jungle Blues, Stoneking delves into electrified musings about zombies, desert islands and good luck charms on Gon’ Boogaloo. One of the album’s best tracks is “Tomorrow Gon’ Be Too Late,” which opens with a talking blues before shifting into call-and-response in the style of 1950s girl groups. “The Thing I Done” is a stark deathbed confessional performed as primitive, stripped-down rock ’n’ roll. And “On a Desert Isle” is a swaying, yodeling ditty of distinction, the kind of far-flung number that would make Leon Redbone immensely proud.

Stoneking made his Toronto debut at the Drake Hotel on June 1st, 2016, performing with an all-female backing band of drums, bass and baritone saxophone. The small but enthusiastic crowd gathered in the Drake’s basement was treated to songs from all three albums and some memorable storytelling, the best of which came when Stoneking recounted how he saved himself from a shipwreck by paddling with his banjo for an oar and landing on the shores of Africa, where he discovered that country pioneer Jimmie Rodgers, otherwise known as the Singing Brakeman and the Blue Yodeler, was revered throughout the continent as a fertility symbol. Howls of laughter filled the room.

Stoneking finished with a solo encore of “Jailhouse Blues.” As he stood onstage with his 1930s Dobro, crooning about breaking the law and facing a lock on the door, Stoneking cut a solitary figure. But the fact he could get his audience singing along on the chorus of this obscure old blues number was a testament to the power of this supremely gifted, highly singular artist. Remember the name, C.W. Stoneking. He’s coming soon to a town near you.