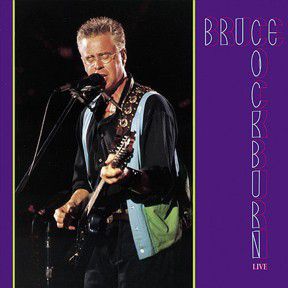 Over the years, Bruce Cockburn concerts have evolved from solo performances in moccasins into full-band gigs in army boots. In the beginning, Cockburn travelled around in an old camper truck, a vagabond poet with acoustic guitar in hand and faithful dog, Aroo, at his feet. During the ’80s, he and his group toured in a large streamlined bus, dressed like urban guerrillas wielding an arsenal of electric instruments. By the end of that decade—and for much of the next—Cockburn downsized and performed with just a pair of talented sidemen. But as his superb live recordings reveal, regardless of the era or the size of his entourage, Cockburn’s concerts are always a wonder to behold: expansive, entrancing and full of surprises.

Live, recorded in August 1989 at Ontario Place, Toronto’s lakeside entertainment complex, has all of those qualities in abundance. With songs dating from 1976’s In the Falling Dark to 1987’s Waiting for a Miracle albums, it features a cross-section of the Canadian artist’s finest material—although some of it has been reinterpreted so dramatically as to be virtually unrecognizable. For Cockburn, this is half the fun. As the acclaimed singer-songwriter once told an interviewer: “I don’t feel any obligation to slavishly duplicate what’s on the record.” Along with his deeply personal declarations of faith and highly passionate songs of social criticism, the album boasts a carefree quality and even a comical side that never comes across on his studio recordings.

Nearly half of the songs on the remastered edition of the album are drawn from Cockburn’s two mid-’80s albums, World of Wonders and Stealing Fire, giving the collection a strong political edge. The bonus track offered here is a stirring rendition of his most controversial song, “If I Had a Rocket Launcher.” But even it is overshadowed by two other hard-hitting numbers—both played solo. Cockburn performs an unforgettable version of “Stolen Land,” his song about aboriginal displacement, singing with righteous indignation over a hypnotic Bo Diddley beat on the bohdran. But the showstopper is a chillingly forceful take on “Call it Democracy,” which still stands as the only song ever written about the greedy International Monetary Fund. Cockburn’s bristling rage is almost palpable as he accuses the “IMF, dirty MF” of fostering “insupportable debt.”

With tight support from Fergus Marsh on stick and Michael Sloski on drums, Cockburn plays with vigour and confidence throughout the concert, lending surprising drama to some songs and memorable solos to others. The opening “Silver Wheels” stands out for its chiming, cascading guitar, while “Maybe the Poet” is played at a breakneck, almost ska-like tempo. But the biggest revelation may be the potent reggae groove of “Broken Wheel.” Played with slashing guitar chords and sharp, jagged rhythms, the song takes on a stark, previously unrealized power.

Other songs are given a joyful treatment. A slower paced “Rumors of Glory” bounces along to a playful reggae beat, with the unusual added flavouring of Cockburn on harmonica. Conversely, a peppier version of “See How I Miss You,” Cockburn’s oh-so-sweet love song, features some of the most dazzling, rapid-fire fingerpicking in a long career characterized by extraordinary guitar work. And when Cockburn breaks into a buoyant rendition of “Wondering Where the Lions Are,” complete with improvised scat vocals, you can almost see him grinning ear to ear as the crowd claps and sings along to the swaying chorus.

But the most surprising and delightful moment is “Always Look on the Bright Side of Life,” which has the crowd this time whistling along. Taken from the crucifixion scene in Monty Python’s Life of Brian movie, the barking-mad song provides just the right amount of levity to the proceedings. Performing it, Cockburn once admitted, “was fun and made sense from the point of view of some people who think that here’s this guy that only did this heavy, political stuff.” Recorded in the midst of his 1989 tour, which saw him play over 100 concerts in 13 countries, Live captures an exceptional performer at the peak of his powers—giddiness and all.