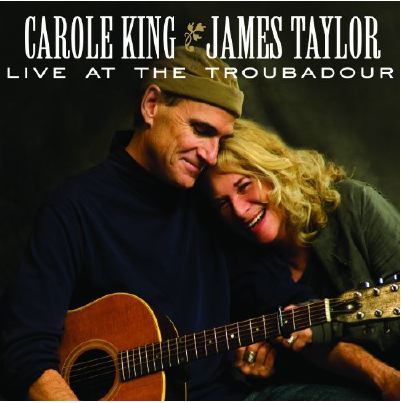 One of the world’s legendary music clubs, the Troubadour in West Hollywood served as the unofficial home to some of the top artists of the 1970s, including the Eagles, Elton John, Jackson Browne, Linda Ronstadt and Joni Mitchell. It was also the first venue where in 1970 Carole King and James Taylor—two of the era’s defining musicians—played together. When the pair returned there the following year, James’ “Fire and Rain” was a number one hit and Carole’s Tapestry was on its way to becoming one of the top-selling albums of all time.

Live at the Troubadour, a special two-disc CD-DVD, captures the excitement when Carole and James performed at the intimate venue for a three-night, six-show run in 2007 to celebrate the Troubadour’s 50th anniversary. “When we reunited it felt like yesterday,” says James. Adds Carole: “James’ and my musical connection and friendship continues to transcend time and space.”

The magic on Live at the Troubadour can be seen and heard in the immaculate video and audio quality of performances of beloved hits like Carole’s “It’s Too Late” and “So Far Away” and James’ “Carolina in My Mind” and “Sweet Baby James.” Supported by guitarist Danny Kortchmar, bassist Lee Sklar and drummer Russ Kunkel—their original backing musicians—Carole and James duet with real warmth on songs that have stood the test of time. When they sing Carole’s “You’ve Got a Friend,” a number that became James’ signature song, it’s clear their special friendship has endured as well.