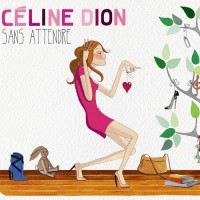 Now in the midst of her second residency show at Caesars Palace, Dion is Las Vegas’ biggest attraction since Elvis Presley. But that hasn’t stopped the Canadian superstar from recording two new albums: one in English, one in French. Water and a Flame, a collection of songs from her Vegas show and several new tracks, will be released next year. Sans attendre, her first French album since 2007’s D’elles, is now available.

Dion’s new CD will translate to listeners in any language. She sings with a passion sometimes only hinted at on her English albums. The mid-tempo “Parlez à mon père is a highlight, sung with a palpable emotion. Other standout tracks include duets with Quebec singer-songwriter Jean-Pierre Ferland and French star Johnny Hallyday. “French,” says Dion, explaining the difference in languages for her, “is a more interior energy, more poetic.” With Sans attendre, Dion’s fans can hear what she means.