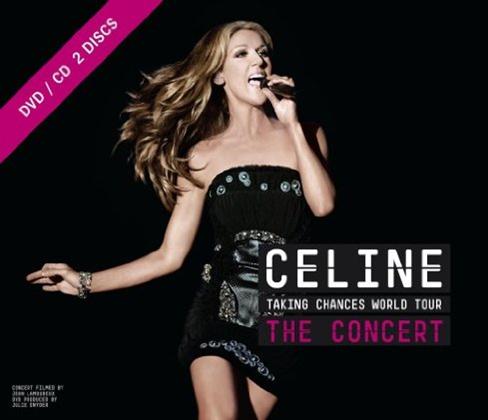 Céline Dion’s Taking Chances World Tour saw the Quebec-born superstar perform in an astonishing 25 countries and 93 cities. The tour, which ran from 2008 through 2009, sold a staggering three million tickets to fans on five continents and came on the heels of the singer’s five-year residency at Caesars Palace in Las Vegas. Recently, Céline announced she’ll begin another three-year stint in Vegas, starting next March, and also that she is working on new French and English albums—all while trying to become pregnant again through fertility treatments.

Later this month, the hard-working icon will treat fans to her documentary Céline: Through the Eyes of the World, which takes viewers behind the scenes of her last tour. In the meantime, she is releasing Taking Chances World Tour: The Concert, a live CD/DVD package that captures the best-selling female artist at her peak, performing with dancers and her crack band on a stage filled with hydraulic lifts and conveyor belts,. Filmed and recorded in Boston, The Concert features many of Céline’s hits, including “The Power of Love” and “My Heart Will Go On,” as well as recent favorites like “I Drove All Night” and “The Prayer,” her duet with Andrea Bocelli.

But The Concert’s most stunning moment comes when Céline wows the audience with an awe-inspiring crescendo on “All By Myself.” As cameras pan the Boston crowd, all of them standing, applauding and cheering, it’s clear that Céline—the world’s most celebrated diva—has lost nothing of her award-winning magic.

Tweet
Liner Notes: The Ugly Ducklings – Too Much Too Soo...
Interview: Michael Bublé - A charmed life