The Beatles changed the world in countless ways, but they also dramatically changed Toronto over three consecutive years of performances (1964 to 1966) at Maple Leaf Gardens. Almost overnight, the city was hit with a cultural shift of seismic proportions: Boys grew Beatle-bangs, girls pinned photos of John, Paul, George and Ringo on their walls and parents worried about the sanity of their teenaged children. Canada’s folk darlings, Ian & Sylvia, had ruled up to that point, but as the male half of that duo, Ian Tyson, remembers, “the minute the Beatles arrived, it was over – well and truly over.” The folk boom slowed, as every kid on the block rushed to form rock bands.

Toronto’s music scene flourished. In addition to the folk that continued to be showcased there, Yorkville’s coffeehouses became home to a steady stream of local groups, some of which faked Beatle accents, adopted English-sounding names or, in one case, billed itself as “Direct from England.” The bars on the Yonge Street Strip also fell under the Mersey Beat’s spell. Aside from the imported tribute bands like the American Beetles and the Female Beatles, Yonge Street clubs’ distinctly Beatle-ish sounds were being made by the Last Words, Jack London & the Sparrows (later renamed the Sparrow before becoming Steppenwolf) and the entirely Toronto-bred Liverpool Set. By 1966, there were as many as 300 bands registered with the musicians’ union and more than 1,000 non-union ones performing across the city. 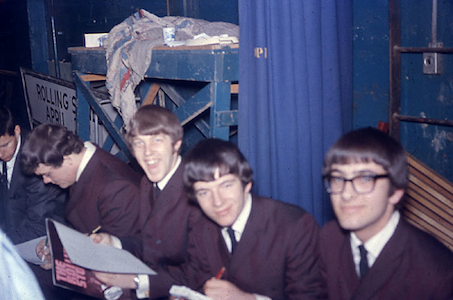 Beatlemania-like hysteria wasn’t reserved for visitors. When Toronto’s Five Rogues, the Spasstiks and the Paupers opened shows for Herman’s Hermits, the Animals and the Lovin’ Spoonful, they found themselves greeted by the same frenzy as the headliners. The British Invasion’s influence reached its zenith on September 24, 1966, a month after the Beatles’ last appearance. Over 16,000 screaming fans—more than came out to see the Dave Clark Five and the Rolling Stones—packed Maple Leaf Gardens for the “The Toronto Sound,” a 14-hour showcase of 14 bands including the Tripp, the Big Town Boys, the Ugly Ducklings and Luke & the Apostles. Toronto’s moment as a music capital had arrived. “It’s just like Liverpool before the Beatles made it,” enthused CHUM radio deejay Bob McAdorey at the time.

If the Beatles and the British Invasion inspired the proliferation of rock bands, the Hawks were responsible for setting the high musical standard for the Toronto Sound, and our city’s soundtrack got decidedly heavier in their wake. Arkansas rockabilly singer Ronnie Hawkins arrived in Toronto in 1958 and assembled the first version of his group the Hawks with fellow Arkansas native Levon Helm and Canadians Rick Danko, Richard Manuel, Garth Hudson and Robbie Robertson, the group that became world-famous as the Band. Setting up shop at Yonge Street’s Le Coq D’Or, Hawkins groomed his recruits into a first-rate backing band, getting them black mohair suits from local tailor Lou Myles and teaching them his own dynamic brand of stagecraft.

“Ronnie Hawkins was a real taskmaster,” recalls Amos Garrett, who played in Yorkville’s the Dirty Shames before joining Great Speckled Bird and becoming renowned for his guitar solo in Maria Muldaur’s hit “Midnight at the Oasis.” “He’d lock his Hawks in the clubs after gigs and rehearse them until dawn. That’s why those guys got so good. And he’d keep them working seven days a week.”

When asked to define the Toronto Sound, Luke Gibson, of Luke & the Apostles, points directly to the Hawks. “It’s a screamingly dirty sound. Most of us learned from watching Ronnie and his boys and hearing that combination of Telecaster guitar and B-3 organ, that whole rhythm-and-blues-based thing they were doing. These were white guys doing R&B stuff in the best way they knew. The Toronto scene was really studious that way and musicians were dead serious about getting the sound right.”

Robbie Robertson’s guitar style was especially influential on local guitar players, including the Mandala’s Domenic Troiano and the Shays’ Fred Keelor. How Robertson produced his bluesy, buzzy Telecaster sound became a source of great mystery. Recalls singer Robbie Lane: “Rumors started to spread. One of the rumors said he took a razor blade and cut the speakers in his amplifier and then taped pennies over the slits. I don’t know many guys ruined their amps trying to figure it out.”

The most successful Toronto bands were playing in both Yonge Street’s licensed bars and Yorkville’s unlicensed clubs and coffeehouses; the latter was an especially fertile breeding ground for songwriting. “With its many clubs,” said Paupers’ guitarist Chuck Beal, “[Yorkville] gave a lot of bands a chance to work six nights a week. And it made them compete every night against the band next door for the crowds.”

Groups like the Paupers, the Mandala, the Big Town Boys and David Clayton-Thomas & the Shays all had Beatle-like fan clubs and recording deals. When those bands started performing south of the border, they immediately impressed audiences and critics with their high level of musicianship. The Paupers opened for Jefferson Airplane at Greenwich Village’s Café au Go Go and blew San Francisco’s finest off the stage. And when the Sparrow first performed in New York, the U.S. music industry magazine Cashbox raved: “If this is Canadian talent, send us more.”

Today, Toronto has one of the most robust music scenes anywhere and is rightfully taking its place among other world-class Music Cities. All the elements are in place, with acclaimed artists, top recording studios, iconic auditoriums and legendary clubs. The roots of that success can be traced directly back to the mid-1960s, to the age of Beatlemania, when Toronto rivalled Liverpool for rock groups and there was even a discernable buzz about something called the Toronto Sound.