Finger Eleven - Them vs. You vs. Me 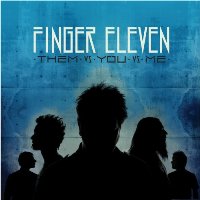 They used to be known as Rainbow Butt Monkeys, but then the dudes from Burlington, Ont. came to their senses. Or maybe not. Anyway, Finger Eleven could care less ever since its ballad “One Thing” became such a monster hit. The alt-rock band’s fourth album offers more of the same, predictably shifting, hard-soft dynamics on songs like “Lost My Way” and “Easy Life.” And the monotonous thump of “Paralyzer” threatens to make that track as ubiquitous (and irritating) on the airwaves as “One Thing.” Pity.