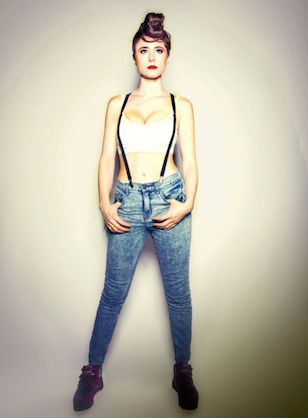 Kiesza has a look and sound as diverse as her background. Born in Calgary of Norwegian and Scottish heritage, she pursued ballet, a stint in the Royal Canadian Navy and even entered the Miss Universe Canada pageant before settling on a career in music. Kiesza’s hit single “Hideaway” blends house, trance and pop. Its dance-filled video, featuring her in blue jeans, suspenders and high-top sneakers, has gone viral with over 135 million YouTube views and made her a star. She’s now writing songs for the likes of Rihanna. Kiesza, 25, who just released her debut album Sound of a Woman, spoke to Hello! about celebrities and her sense of style.

How would you describe your look? There’s a lot of fusion in my style. My fashion sense came from when I was younger, digging at discount stores and trying to find one cool item. Then I’d cut and sew to make it fit with something else. I’m still the same way today. I don’t stick to one brand. It’s a real mix and match approach, just like my music.

What was the best and worst thing about being a Miss Universe Canada contestant? The best thing was it got me thinking about current events. You had to study what’s going on in your country and the world and that’s stayed with me. The worst thing was I didn’t really fit in. It was a very superficial environment, focused on looks and a particular body type. Some girls were actually taking diuretics to get skinny, which I found really sad.

You’re moving in pretty glamorous circles now. Who’ve you met? I was working with Diplo and through him just met Katy Perry. She’s so sweet. You’d never know she was a celebrity. She seems like the girl next door. Backstage at Jimmy Kimmel Live! I met Daniel Radcliffe. Being a massive Harry Potter nerd, I was having a heart attack. But he was shockingly nice and allows every fan to photograph him and takes time to talk with them. I was really impressed.

Have you met Rihanna? Not yet. I wrote two songs for a Dreamworks movie she’s voicing and as a result she’s recorded several more of mine. Hopefully at least one of them will be included on her next album.