When I first met her, she spoke in a whisper, protecting the gold-plated vocal cords that had made Eurythmics one of the top musical acts on the planet. Annie Lennox was staying in a quiet residential neighborhood near West Hollywood, while she and Eurythmic Dave Stewart rehearsed for the band’s Revenge tour. It was the summer of ’86 and Lennox looked every bit the striking pop icon, one whose theatrical, gender-bending and diva-vamping appearances had transformed the pop landscape. Dressed in a pink satin blouse and a brightly colored plaid suit, a variation on her native Scottish tartan, she spoke at length about music, image and Eurythmics’ battle for artistic control.

Fast forward more than two decades and Lennox is speaking loudly and clearly, but not about her career. Although she has a new solo album to promote, the 52-year-old artist—often called the greatest white soul singer alive—is far more interested in talking about the state of the world. Lennox has long been involved in charity, donating Eurythmics profits to Greenpeace and Amnesty International and singing at Nelson Mandela’s 70th birthday concert at London’s Wembley Stadium in 1988. But it was subsequent meetings with Mandela that deepened her commitment. Four years ago, Lennox traveled to South Africa to attend the launch of the 46664 Foundation, Mandela’s AIDS awareness charity, and then returned there the following year with her two teenage daughters. Now she’s devoting much of her time to the fight against the disease in Africa.

“I understood that people were affected by the virus,” says Lennox, speaking from her London home, “but the penny hadn’t fully dropped until I went to South Africa and realized that the devastation from it amounts to genocide, as Mandala describes it.” She added: “There are millions of people who have died from the disease—in fact more than the toll of both world wars put together—and it’s not getting better. The situation with HIV/AIDS is not being addressed effectively and I’d like to see people getting access to medication and treatment so their lives can be extended, so that mothers can live to bring their children up and not leaven them as orphans on the planet.” 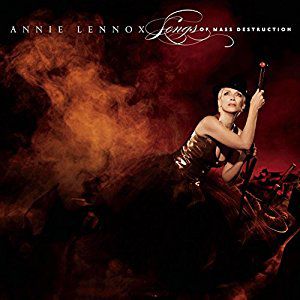 Lennox has addressed the issue on “Sing,” a rousing, gospel-style number on her powerful new album, Songs of Mass Destruction. Featuring 23 of the world’s most recognizable female singers, including Madonna, Céline Dion, Joss Stone, Gladys Knight, k.d. lang, Angélique Kidjo, Sarah McLachlan, Bonnie Raitt, Martha Wainwright and Shakira, it aims to raise money for South Africa’s Treatment Action Campaign (TAC) and awareness about the need for a mother-to-baby HIV transmission prevention program. Along with the track “Womankind,” the song is reminiscent of Eurythmics’ 1985 hit “Sisters (Are Doin’ It for Themselves)” and gives Lennox’s latest album a distinctly feminist slant.

A question about this theme triggers another passionate outburst. “Feminism has become almost a joke in our countries in the west, and I’m quite taken aback by that,” says Lennox. “Okay, women, through a lot of sacrifice, achieved the vote here, which is an empowering thing, socially and politically. But when you go to developing countries, you’ll see that women don’t always enjoy such privileges. Feminism is still very much required in other countries. That’s why I describe myself as a feminist, because developments that have been achieved in the west, in wealthy countries, need to be extended to countries where women are still struggling.”

Aside from those anthemic numbers, Songs of Mass Destruction—produced by Glen Ballard, the man behind Alanis Morissette’s Jagged Little Pill—is essentially a dark album, which isn’t surprising, coming from the artist who some critics have called the “diva of doom.” In Eurythmics, Lennox was the moody, mysterious introvert to Stewart’s fun-loving extrovert and self-confessed workaholic, somewhat fragile and prone to depression. Most Eurythmics songs mixed positive and negative messages—both pain and ecstasy—in the lyrics. And Lennox’s solo albums, including 2003’s Bare, written after her 12-year marriage to Israeli filmmaker Uri Fruchtmann ended, mined a motherlode of emotional turmoil.

New songs like the wrenching “Dark Road, the plaintive “Lost,” the bluesy “Through the Glass Darkly” and wildly soulful “Ghosts in My Machine” express a sometimes harrowing despair. And Lennox is the first to admit it. “Yes, I’m a dark person, prone to looking at the dark side of life and investigating it and feeling it strongly,” she says. “That’s why my songs are so intense, because I identify with depression and darkness and despair completely.”

But Lennox believes there’s good reason for such feelings. “Looking around the world at large, I feel horrified by what I see,” says Lennox, getting animated again. “I see so much savagery and butchery and so many lies from political leaders. We’ve been hoodwinked and the lunatics have now taken over the asylum. I’m so distressed about the planet, about global warming and how in five years we might be looking at something cataclysmic. It concerns me as much as warfare, which I don’t believe is a solution to terrorism. The debacle in Iraq has illustrated this very clearly. I’m also talking about the situation in the world where so many people are exploited and have nothing and live in unimaginable hell.” She adds: “I come from a working-class background, but my lifestyle is now a very comfortable one. I feel responsible to try and change the situation in the world that could easily be changed if people had the will and the focus.”

Along with her ongoing work on behalf of TAC and Mandela’s 46664 Foundation, Lennox is the patron of a Masters Course in Humanitarian and Development Practice at Oxford Brookes University. Last year, she spoke at the British House of Commons on the need for children in the England to help their less fortunate counterparts in Africa—something she has already undertaken with her daughters, Lola and Tali, who accompanied her to an orphanage and hospice in one of South Africa’s shantytowns.

Her activism has led some to dub her the female Bono, a description that causes her to bristle. Lennox, who took large stretches of time off from music to raise her daughters, explained her humanitarian motivation to a South African journalist. “Doing something gives me a purpose,” Lennox said. “It isn’t just that I’m giving, giving. There’s something about the inherent sense of dignity that gets fed by doing, by becoming proactive. I get something back. I can walk with a sense of respect and dignity. Otherwise, I’m just a tourist here.”

Lennox has come a long way from her formative days with Stewart in a pre-Eurythmics band called The Tourists. Once the icy, synth-pop artist of the ’80s, who used androgyny to break music-industry stereotypes, she is now a warm, forceful, even heroic figure in the pop world. Motherhood, she says, transformed her. “I’m more mature, more responsible and more aware in all kinds of extraordinary ways,” she says. “I feel enriched from having children.” Did her daughters have any input on the new album? “Well, they gave me the thumbs-up approval,” she says before adding, with a laugh, “and implored me not to try any rapping. So I’m grateful to them for that.”