Music Feature: Stranger in the Market To walk through the middle of Toronto's Kensington Market on a Saturday in the early ’80s was to enter what locals called the “wobble zone.” There on a stretch of Kensington Avenue, between St. Andrew and Baldwin, the booming bass sounds coming from two sets of opposing speakers could throw passersby a little off balance.

The duelling sound systems, like something out of The Harder They Come, belonged to a pair of Jamaican expat musicians who ran competing reggae record shops, each facing the other. Stranger Cole came first, in 1978, launching his Roots Records store – the first Caribbean business in the Market – at 58 Kensington. Four years later, Rannie “Bop” Williams opened Record Corner across the street, at number 63. 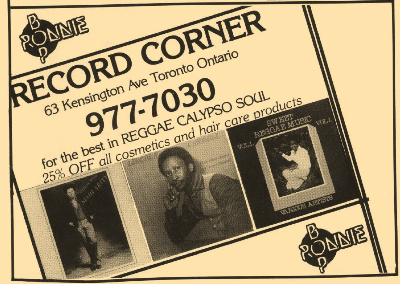 Rannie, a guitarist from Spanish Town outside Kingston, had played with the likes of Bob Marley, Jimmy Cliff and Sly and Robbie. He arrived in Toronto in 1980 and quickly gravitated to the Market, selling reggae recordings, some on his Ronnie Bop label, and leading his own band, Yah Wah Deh.

Where Rannie was an accomplished behind-the-scenes session musician, Stranger had been a major star in Jamaica, a bona fide singing legend from Trench Town. Born Wilburn Theodore Cole (nicknamed “Stranger” because he looked like no one in his family), he began writing songs and recording as a teenager for producer Duke Reid, cutting early ska numbers like the popular “Rough and Tough.”

For the rest of the decade, as ska turned into rocksteady and then reggae, Stranger’s hits kept coming. Working with other famous producers like Bunny “Striker” Lee, Sonia Pottinger and Lee “Scratch” Perry, he recorded a string of duets with Patsy Todd, Ken Boothe and Lester Sterling, his partner on the bubbling classic “Bangarang,” considered the first reggae song.

When the hits ran out, Stranger emigrated to England to try his luck. Marley’s “Punky Reggae Party” was still on the horizon, but English kids had already caught on to Jamaican singles like Desmond Dekker’s “The Israelites.” And the reggae instrumental “The Liquidator” was a popular tune in soccer stadiums all over the country. Into that environment stepped Stranger, who toured the U.K. with Owen Gray and Alton Ellis in front of large crowds, and briefly found a new generation of fans for his vintage songs. 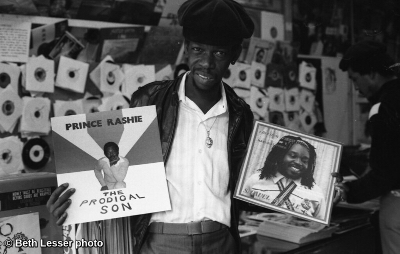 In 1973, at the suggestion of an uncle who lived here, Stranger moved on to Toronto. Things weren’t easy at first; Stranger took work at a Tonka Toys factory, then at Eaton’s department store. But his turning point came when a friend offered to share space in his Kensington Market carpet store. “The carpet thing wasn’t doing well for him, especially in winter,” Stranger, now 77 and living back in Jamaica, told Chris Flanagan in his 2017 Cole documentary Ruff & Tuff. “So I started selling some of the records I had out of his shop and it grew from there.”

Among the Market’s jumble of butchers, cheese shops and fruit and vegetable stalls, Roots Records stood out as something different. Over the door was a sketch of the Ethiopian emperor and Rastafarian god Haile Selassie. The front window featured lettering in red, gold and green paint, while on the sidewalk sat Stranger’s rickety sound system, held together with bailing wire. Stranger would warmly greet visitors, flashing his gold-capped grin, and the store quickly became a popular downtown hub for the city’s Caribbean community.

“Stranger is a beautiful human,” recalled Mohjah, then guitarist with Toronto roots reggae rockers Truths & Rights, “and was really like a father to us. We’d go to his shop, hang out and talk about music. Stranger looked to us as the new generation and pushed us to do the work to take reggae further.” 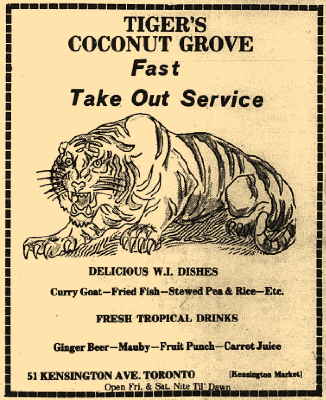 Nearby Stranger’s was another Caribbean gathering place that Mohjah remembers: Tiger’s Coconut Grove, a café run by Eric Vernon “Tiger” Armstrong, a former Jamaican wrestler, horse trainer and limbo champion who’d once performed on Yonge Street as Lord Power during the calypso craze of the early ’60s. Decorated like a Jamaican beach bar, with palm fronds and a wallsized mural of island scenes in shades of emerald green and coral pink, Tiger’s was the Market’s first source of curry goat, veggie patties and tropical juices. “I’d always go there to get my drink.” Mohjah says. “Pina colada!”

Fergus Hambleton, co-founder with Jo-Jo Bennett of Canadian reggae stars the Sattalites, also has fond recollections of Tiger and Stranger. “In the late ’70s, Tiger let my group the Basics play in his place,” he recalls, “even though we were a rock band and only played reggae occasionally, when R. Zee Jackson sat in with us.” Adds Hambleton, then living on nearby Spadina: “The Market was my introduction to reggae. One night, a friend and I were walking by Stranger’s and found a garbage bag outside filled with about 150 Jamaican 45s. Not sure why he’d thrown them out, but we went back to my place and divvied them up. Listening to those singles was a real education for me.”

When Stranger returned to performing and recording, sometimes solo and occasionally with the band Chalawa, he called on other Jamaican legends living in Toronto – Jackie Mittoo, Leroy Sibbles and Johnny Osbourne among them – as well as players like Hambleton to accompany him. Adrian Miller was just a teenager absorbing musical influences when he first encountered Stranger at Toronto’s Summer and Half Moon recording studios. But later, as a lead singer himself, first with Earth, Roots and Water and later with 20th Century Rebels, he spent as much time as he could down in the Market visiting Roots Records.

“Stranger had everything in there – the cream of ska, reggae and rocksteady on labels like Beverley’s, Treasure Isle, Studio One and Tuff Gong,” Adrian recalls. “It was like a who’s who of Jamaican music and I was the kid in the candy store, taking it all in.”

Originally published in the April/May issue of West End Phoenix