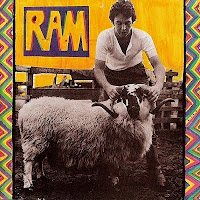 Time has been kind to Ram. When the McCartneys first released the album in 1971, critics savaged it as lightweight and inconsequential. It certainly offered no big artistic statement of the Sgt. Pepper’s variety. Instead, it reflected Paul’s embrace of a simpler life away from the Beatles. Written during his and Linda’s extended holiday in Scotland’s Mull of Kintyre, while the band was in the midst of a bitter legal break up, the songs offer a sense of unbridled joy.

Now available in several formats, including a Deluxe Edition Box Set featuring bonus CDs, a DVD and a 112-page book, the reissued Ram is a revelation. Along with hits like “Another Day” and “Uncle Albert/Admiral Halsey,” the songs reflect sunny blissfulness (“Heart of the Country”), funky domesticity (“Eat at Home”) and zany humor (“Monkberry Moon Delight”). There are also several previously unreleased gems like the playful ditty “Hey Diddle.” Forty-one years on, Ram has never sounded better.