R. Dean Taylor - The Canadian who stepped out of the shadows of Motown He was an unlikely pop star of the post-Woodstock era. Clean-shaven and pipe-smoking, with short, clipped hair and a preference for cardigans and safari jackets, he looked more advertising executive than hip musician. But Canada’s R. Dean Taylor was always determined to make it in the entertainment world.

Venturing to Detroit in the early 1960s, he landed himself a job at Motown and became an anomaly – a white songwriter at a black rhythm-and-blues record label. Like many session singers and musicians, it seemed Mr. Taylor was forever destined to be just another background player, standing in the shadows of Motown. That changed when his song “Indiana Wants Me” catapulted him to stardom. 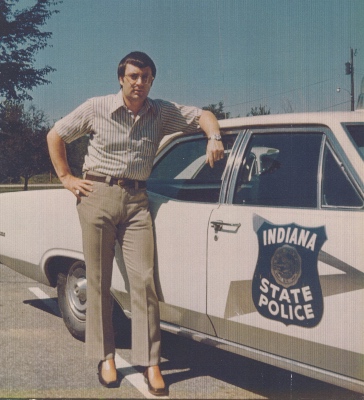 After co-writing hits for the Supremes, the Temptations and the Four Tops, Mr. Taylor watched as “Indiana,” an unusual tale of a murderer on the run from the law, complete with the sounds of police bullhorns, bullets flying and sirens wailing, raced up the charts, reaching No. 5 on Billboard and No. 1 on Cashbox in 1970. He followed that with other dramatic story songs like “Gotta See Jane” and “There’s a Ghost in My House,” which became major hits in Canada and Europe.

Wearing multiple hats as songwriter, singer and producer for Motown’s subsidiary label Rare Earth, Mr. Taylor helped the company break into the coveted rock market. After recording his albums I Think, Therefore I Am for Rare Earth and L.A. Sunset for Polydor, he went on to form his own record label, production company and studio and kept busy with a steady string of musical projects. During his career, Mr. Taylor received five BMI Awards for the Most Performed Songs in America, while his co-written song “Love Child,” a No. 1 hit for Diana Ross and the Supremes, was inducted into the Canadian Songwriters Hall of Fame (CSHF) in 2008. He also co-wrote the group’s followup socially relevant hit “I’m Livin’ in Shame.” 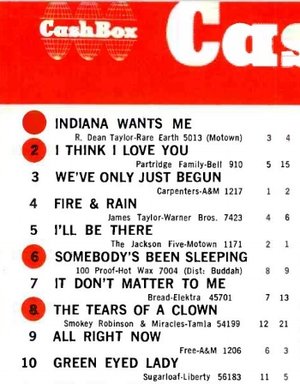 Mr. Taylor died at 82 at his home in Los Angeles on Jan. 7, following a year of declining health after contracting COVID-19. With news of his death, the music world paid tribute to a man as humble as he was talented. “Dean was never a publicity seeker,” said Martin Melhuish, author of Oh What a Feeling: A Vital History of Canadian Music. “He was always content to let his music speak for itself.” Observed CSHF founder Frank Davies: “Dean was driven by his love of songwriting. He walked right into Motown, which really takes some nerve, and got mentored by the great songwriting trio of Holland-Dozier-Holland.”

The award-winning American keyboardist Darrell Diaz, who spent a decade collaborating with Mr. Taylor at his Los Angeles home studio until 2016, admired his Canadian friend’s creative gifts. “Music was in Dean’s bones,” said Mr. Diaz, best known for his work with Herbie Hancock. “He never stopped writing, singing and playing guitar and was always authentic in his music. Dean’s songs are like screenplays – you can really see the people and places he’s singing about.” Added Mr. Davies: “Those classic songs are now embedded in our psyches.” 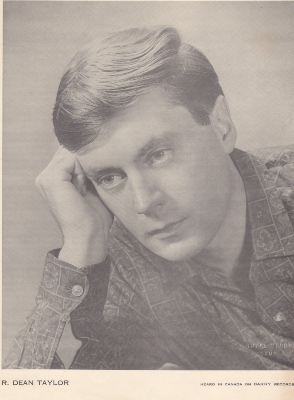 Richard Dean Taylor was born in Toronto on May 11, 1939, the second son of Pearl (née Tutton) and William Taylor a businessman. Influenced by Elvis Presley, Johnny Cash and Carl Perkins, a precocious, 12-year-old Dean began performing country music around the city. By his late teens, he was playing in bands at Yonge Street’s Edison Hotel and Le Coq D’Or tavern. His first studio session yielded the regional rockabilly hit “At the High School Dance,” recorded with his friends, drummer Jack Posluns, and bassist Pete Traynor, future founder of Traynor Amps. Other songs released on the Barry label followed.

After attending Forest Hill Collegiate, Mr. Taylor studied at Pickering and Ridley private colleges but writing and recording songs proved a distraction. In 1963 he abandoned school and, on the advice of a friend, drove to Detroit to visit the newly opened Motown Records. A successful audition led to Mr. Taylor getting hired as an apprentice of Brian Holland who, together with his brother Eddie Holland and Lamont Dozier, was the pop factory’s prized in-house songwriter. Some of Mr. Taylor’s first compositional efforts for the label included several songs for the infamous Mynah Birds, the short-lived Toronto band that included Neil Young and Rick James.

“I saw in Brian, genius,” Mr. Taylor told Hit Parader magazine’s Larry LeBlanc in 1972. “Brian and I became very close friends – a brothers’ relationship. He is the Supremes. He is the Four Tops. Period. That’s Brian.” Living in a rooming house near Motown, Mr. Taylor spent his days in the studio, playing tambourine on sessions, studying the Hollands and Mr. Dozier at work and asking questions about production techniques. 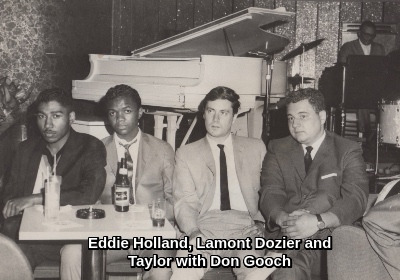 His mentors took full advantage of the Canadian’s eagerness. “I wrote an enormous number of songs for [Holland-Dozier-Holland],” Mr. Taylor told Ritchie Yorke, in his 1971 book Axes, Chops and Hot Licks: The Canadian Rock Music Scene. “Some I was paid for; others I wasn’t. Now I feel like I was shafted. But it was like going to school. The price I paid for the schooling was enormous [some of those copyrights are worth a small fortune now, Mr. Yorke added] but I still love them dearly.”

Brian Holland did convince his bosses to approve the recording of Mr. Taylor’s first single, a gentle Vietnam protest number called “Let’s Go Somewhere.” But the song went nowhere. The clean-cut Mr. Taylor, who insisted “you don’t have to look scraggly and unkempt to sing a protest song,” kept plugging away. In 1967, he recorded “There’s a Ghost in My House.” The following year, after a rainy drive back home, he wrote the urgent “Gotta See Jane,” with its staccato lines, “Windshield wiper/splishin’ splashin’/callin’ out her name/just gotta see Jane.”

Meanwhile, Mr. Taylor remained loyal to his Toronto buddies. He got Mr. Posluns work as a drummer for Marvin Gaye and landed his friend Don Gooch an engineering job in the Motown studio. When Mr. Taylor was cutting his breakthrough fugitive song “Indiana,” inspired by the movies Bonnie and Clyde and Butch Cassidy and the Sundance Kid, he recorded Mr. Gooch barking over a bullhorn, “This is the police … give yourself up, you are surrounded.”

After “Indiana” topped the charts in the U.S. and “Jane” did the same thing in Canada, the once disbelieving record label was suddenly ecstatic about him as an artist. “Berry Gordy Jr., just went crazy,” Mr. Taylor told Hit Parader. “The first white artist to pop through No. 1 records. It opened up a lot of doors for Motown.” The song had been initially championed by two radio programmers in particular, Windsor, Ont.’s Rosalie Trombley at CKLW and Detroit’s Scott Regen at WKNR, who wrote the liner notes for I Think, Therefore I Am.

Mr. Regen stated that he’d first encountered the rising star in the Motown studio, playing tambourine on the Four Tops’ “Reach Out (I’ll Be There).” “Although I didn’t know Dean then,” he wrote, “he looked like a nice person. I remember he smiled a lot, except when the recording light came on. Then Dean gripped his pipe between his teeth and concentrated on his playing with a fierce intensity.” Concluded Mr. Regan: “It is that dedication to music that has helped Dean achieve the super success he now enjoys.” 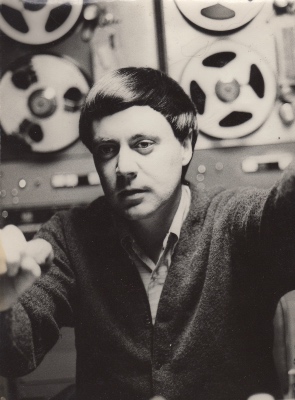 After Motown relocated its head office out to Los Angeles, the label moved its white star there too, along with his new wife, Janee, a former lifeguard he’d met while swimming at his Detroit hotel-apartment. Using L.A. as his base, Mr. Taylor continued writing and recording his own songs and producing bands like Messengers and Rustix for Rare Earth. “Dean became a real mentor for us,” recalled Rustix frontman Chuck Brucato. “We were a bunch of kids, intimidated to be at Motown, but Dean made us comfortable and showed us how to make our songs better.”

The belated discovery of “Ghost” in England, where it became a hit on the Northern Soul dance scene, led to a career resurgence and Mr. Taylor undertaking a nine-week tour there in the summer of 1974. His body of work featured other big, cinematic songs in the style of Neil Diamond or Jimmy Webb, dealing with such varied subjects as ecological damage (“Ain’t It a Sad Thing”), an unwed mother who turns to prostitution (“Back Street”) and a heartbroken man in jail (“Taos New Mexico”). Mr. Taylor’s love of films was reflected in the Lolita-esque Shadow and the 1950s-style pop number, “Just Like in the Movies.”

When he wasn’t busy writing or recording songs, Mr. Taylor, an animal-loving vegan, spent time hiking, camping and antique hunting at swap meets and toy shows, where he collected cartoon character wrist watches and memorabilia related to cowboy TV stars like Gene Autry and Roy Rogers. According to his wife, Janee, he had two unfinished writing projects: a memoir of his Motown years and a screenplay based on his “Indiana Wants Me” storyline.

“Versatility was another of Dean’s strengths,” Mr. Melhuish said. “There’s irony in the fact that, with his passing, people will learn more about this modest man now than when he was at the height of his recording and songwriting career.”

Mr. Taylor, who was predeceased by his older brother, Don, leaves Janee, his wife of 52 years.

Originally published in The Globe and Mail 24 January 2022