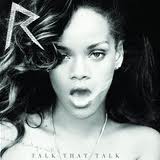 Lady Gaga is audacious and Britney Spears is troubled, but Rihanna is unquestionably pop’s naughty girl, a church-raised singer who didn’t hesitate to call her third CD Good Girl Gone Bad. On her follow-up albums, Rated R and Loud, Rihanna displayed her raunchy side, releasing provocative, kinky singles like “Rude Boy” and “S&M.” That image, combined with her sassy short-shorts and a pumped-up, club-ready sound, helped to catapult Rihanna to pop’s forefront with worldwide sales of over 20 million.

The Barbadian-born singer’s sixth album, Talk that Talk, is far louder and raunchier than anything she’s previously made, especially tracks like unabashedly dirty “Birthday Cake” and the thumping “Cockiness (Love It),” whose highly suggestive lyrics are best left unquoted. The stuttering “Watch ’n’ Learn” is instructional, in a sex education kind of way. And the DJ-friendly title track, a propulsive duet with Jay-Z, includes a few expletives that are destined to be bleeped on radio.

But Talk that Talk also shows signs that the Grammy-winning “Umbrella” singer has now embraced her romantic side. The album’s best songs are those that deal with that other four-letter word: love. The slower, acoustic number “We All Want Love” quickly segues into the dreamy “Drunk on Love,” in which Rihanna confesses herself to be a “hopeless romantic.” And the closing ballad “Farewell” is both stirring and heartfelt. But the highlight is “We Found Love,” featuring singer-producer Calvin Harris, and already a worldwide hit. “The way I’m feeling I just can’t deny,” sings Rihanna over a joyous Euro-disco beat. “I’ll let you in on a dirty secret,” she teases on “Roc Me Out,” “I just want to be loved.” While pop’s Caribbean queen hasn’t entirely abandoned her raunchy side, Talk that Talk offers some refreshing signs that there’s still plenty of good left in pop’s bad girl.