Of all the great old-time calypsonians, few could match Trinidad and Tobago’s Roaring Lion for witty wordplay and mellifluous melodies. With his rapid-fire delivery, he could easily out-duel contemporaries like Tiger, Atilla the Hun and Lord Executor with wickedly sharp metaphors, alliteration and insults. And he didn’t shy away from tackling the most risqué subjects.

One of Roaring Lion’s most famous recorded songs, “Netty Netty,” about a prostitute who leaves town to have an abortion, was banned in parts of the Caribbean. “Dorothy Went to Bathe” tells of a girl who lost her virginity to a catfish, while “The Lost Watch (Tik, Tik, Tik)” deals with a woman who steals a watch and hides it in her vagina. Legend has it that some Lion records in the BBC library have warning stickers that read: "Do not play this track.” 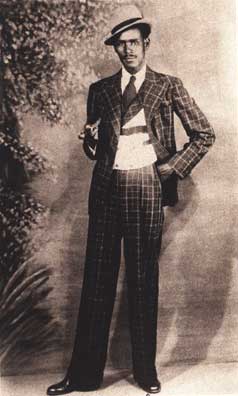 Born Raphael de Leon in 1908, Roaring Lion ruled the calypso roost  from the 1930s to the ’50s and is credited for much of the music’s popularity. He gave a command performance for U.S. President Franklin D. Roosevelt in 1934 at New York’s Waldorf Astoria. When Roosevelt asked him where he was from, Lion proudly responded “The Land of Calypso,” a name by which the island is still known today.

Lion, who made liberal use of creole phrases and double-entendres in his lyrics, didn’t suffer fools gladly and had few kind words for Harry Belafonte, claiming the star had stolen several of his songs. “He’s a crook,” Lion said categorically. “I wrote to him about how he capitalized on my songs and he simply told me my songs weren’t registered.”

One of Lion’s best numbers is an early protest song “Jail Dem,” in which he calls on authorities to incarcerate black marketeers for pushing prices up and making food unaffordable to common people. “Jail dem, before it’s too late,” he sings, calling profiteers “reprobates.” Like all great protest songs, it still has a relevance today.

Day after day there is a hew and cry

Black market is rampant thru rank and file

Babol[1] and profiteering is now the style

It’s everywhere to be seen the law is being contravened

So the police should intervene.

To charge for their bushes they are not afraid

Sixty cents for a piece of shado benny[2]

A dollar for a twig of teema weed[3]

The dam bush is growing all in front yuh door

It’s everywhere to be seen the law is being contravened

The police should intervene.