Listening to the Souljazz Orchestra is like to taking a rhythm-crazed, horn-drenched trip across the planet, hopping from Latin salsa and Caribbean funk to African beats and jazz from east and west.

For a dozen years, the tropically inspired, Ottawa-based band has crisscrossed Europe and North America, introducing its exotic musical mosaic to enthusiastic audiences and critical acclaim. This summer is no different, as the group—hot on the heels of its excellent sixth album, Inner Fire—continues to blaze a trail at festivals on both continents. Souljazz leader Pierre Chrétien says the six-piece ensemble also hopes to reach South America and Africa for the first time this year.

That Souljazz has never been to Africa is surprising, given the band’s close association with the sounds of Afrobeat legend Fela Kuti, who died in 1997. “We’ve gotten close so many times,” explains Chrétien, the group’s classically trained composer, arranger and multi-instrumentalist. “We were invited to play the Shrine (Fela’s club in Lagos) by the Kuti family, but things got complicated with flights and visas and it fell through unfortunately. We’re still looking to get to Africa which, when it happens, will like a pilgrimage for us.”

The group entered the court of the Afrobeat king that year when it crossed paths with Dele Sosimi, Fela’s keyboard player in his Egypt 80 band. “Dele came up to me at the Afrikadey! Festival in Calgary,” Chrétien recalled, “said he needed some backing musicians and would we help him out. I said ‘of course’ and was given this huge bible of pretty complicated charts. But we learned them and Souljazz ended up doing a whole show with him. Added Chrétien: “We’ve been good friends ever since.”

Afrobeat became the group’s signature sound, a kinship Souljazz shared with other acts like Montreal’s Afrodizz and Brooklyn’s Antibalas. But ultimately the band felt pigeonholed by the tag. “Whenever we did anything but African tunes people were like ‘why aren’t you doing Fela Kuti songs?’” recalls Chrétien. “It became very limiting and frustrating—especially since we’ve been playing Latin, jazz and other African music from the beginning.” 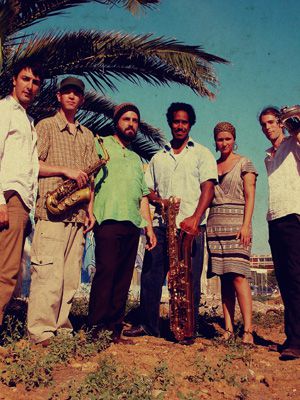 The band’s affinity for salsa was first heard on its early dancefloor sizzler “La Habana” and is prominent on Inner Fire’s fiery jam “Agoya,” which Chrétien co-wrote with Lafrenière. The drummer embraced Latin grooves back in 2003, when he spent a year living in Cuba as a kind of musical refugee. “Philippe was there illegally,” Chrétien explains, “living in the basement of this old lady’s place and kind of hiding out. But everyday he’d sneak out and go to Havana’s music conservatory where they’d give conga lessons. Philippe was a good drummer when he left for Cuba, but when he came back he was a monster. That’s when he became our drummer.”

Similarly, the group’s love of jazz has been evident ever since it covered Pharoah Sanders’ “The Creator Has a Master Plan” on Freedom No Go Die. On the new album, the third to be released on England’s Strut label, Souljazz ventures into spiritual jazz territory with “Celestial Blues,” written by Andy Bey for Gary Bartz’ NTU Troop. Over Chrétien’s vibes and Frantz’ alto sax, Rivard sings soulfully about expanding one’s mind and lifting one’s spirit “high to the sky.” It’s a standout track and was a highlight when the band played to a packed house at Toronto’s Garrison club in March. 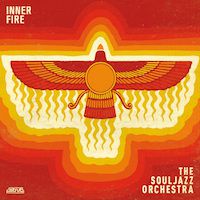 The musical explorations run further afield on Inner Fire’s “Kingdom Come,” an Eastern-tinged workout steeped in mysticism that brings to mind Duke Ellington’s “Caravan” and Ornette Coleman’s North African excursions. Chrétien confirms this, but cites another influence on the song. “Even though it’s an original tune, it’s inspired by all kinds of things,” he says, “including the Ethiopian jazz of Mulatu Astatke. So it’s got a bit of all that in there.”

An indication of how wide the Souljazz palette runs can be found on the band’s website, where, since 2005, Chrétien has been posting his CD and vinyl discoveries on the site’s “Soulfood” page. It’s a mindboggling list that includes everything from funk legend Curtis Mayfield and calypso great the Mighty Sparrow to Nuyorican boogaloo and Brazilian tropicália. What has he been listening to lately? “A lot of French Caribbean stuff,” he says, “especially a band from Haiti called Ibo Combo, which has really interesting rhythms. I’m also checking out new African dancefloor things like coupé-décalé, originally from Côte d’Ivoire, and ndombolo from the Congo. I try to keep my ears open all the time.” 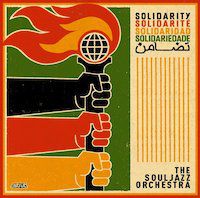 Open ears are a prerequisite for audiences to enjoy the Souljazz sound, something Chrétien finds easier to find in Europe. “Over there, you can turn on the radio and hear soul, jazz, funk, African and Latin music just about any time of the day,” he says. Influential British DJ Gilles Peterson is a huge fan of the band and regularly plugs Souljazz recordings on BBC. The popular French podcast Paris DJs picked the band’s Solidarity as the #1 album of 2012 and the group has appeared at numerous large European festivals, sharing stages with world music stars like Manu Dibango, Angélique Kidjo and Seun Kuti and playing to audiences up to 15,000.

The reception for Souljazz has been steadily growing here too. The band enjoys airplay on CBC radio and won World Music Album of the Year at the Indie Awards in 2013 for Solidarity and has earned two Juno Award nominations. American radio is catching on as well. Says Chrétien, who remains deeply committed to leading the Souljazz crusade: “If you dig what you’re doing and stick to it, people will eventually come to you.”