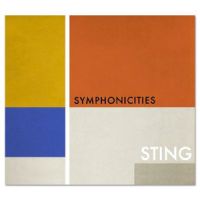 Sting is an adventurous soul. Whether hiking deep into the Amazon rainforest to meet Kayopó Indians or waxing lyrical about the joys of tantric sex, the former Police man is anything but predictable. Musically, too, the pop star has taken risks, exploring Algerian rai and 16th century Elizabethan lute music. “Rock ’n’ roll has become like a dead art,” he said recently. “It’s tyranny in the backbeat. It’s 4/4 time. It’s the same three chords. It’s almost like a fundamentalist religion. Stravinsky is more rebellious than rock.”

To prove his point, Sting has recorded Symphonicities, a CD to accompany his world tour with the 45-piece Royal Philharmonic Concert Orchestra. The album features a dozen of his most celebrated songs ambitiously re-imagined for symphonic arrangement. Sting had previously dipped his toe in classical waters with 2009’s If on a Winter’s Night, a seasonal set of early English carols and reconfigured tunes by Bach and Schubert. Recent performances with the Chicago and Philadelphia orchestras were also inspirational.

With Symphonicities, the man born Gordon Sumner has plunged headlong into the orchestral world—with surprising results. “Roxanne,” Sting’s plea to a Parisian prostitute, takes on a darker, melancholic mood, while the symphonic “Every Little Thing She Does is Magic” is both punchy and rhythmic. Most successful is “Englishman in New York,” Sting’s ode to Quentin Crisp, now recast with a suitably eccentric arrangement of jazz and classical overtones. “I’m outside my comfort zone with classical music,” Sting admits. “But I’m here to learn.” Bravo.