The Little Willies - For the Good Times 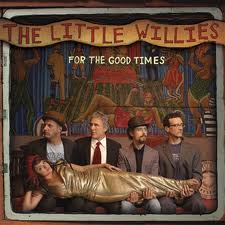 Norah Jones is one songbird that refuses to be pigeonholed. When she burst on to the scene in 2002, with her multimillion-selling debut, Come Away with Me, the singer-pianist was widely pegged as a jazz artist. Clearly, Jones found that description too restrictive. Almost immediately, she began stretching out artistically, collaborating with rappers OutKast, r&b legend Ray Charles and rockers the Foo Fighters. She also turned to acting, starring in the 2007 film My Blueberry Nights.

While Jones’ subsequent albums, including The Fall and the 2010 compilation …Featuring, have all showcased her diverse musical tastes, it has been her side projects that have provided her with the most creative freedom. To date, Jones has sung with Puss ’n’ Boots, an all-female rockabilly group, and performed and recorded with El Madmo, a self-described “silly” rock band in which she donned a blonde wig and assumed the stage name Maddie. In 2006, she also recorded a country album with the Little Willies, a group that included her boyfriend, bassist Lee Alexander.

Although Jones and Alexander have since separated romantically, they’re still making music in the Little Willies, which has now released its second album. Featuring covers of country classics by Johnny Cash, Willie Nelson and Kris Kristofferson, For the Good Times finds Jones blossoming into a real down-home diva. Whether dueting with Little Willies’ Richard Julian on “Lovesick Blues,” a song popularized by Hank Williams, or belting out Loretta Lynn’s feisty “Fist City,” Jones sounds like a Nashville natural. But the album’s standout track is Dolly Parton’s famous hurtin’ hit “Jolene,” which Jones sings with convincing heartache. If she keeps this up, the Grammy-winning artist could one day become a regular—like Dolly herself—at the hallowed home of country music: the Grand Ol’ Opry.

Tweet
What was your favorite Canadian song of the 1990s?
Nick's Picks: Best Albums of 2011