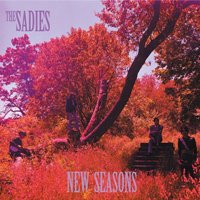 Like their siren sister Neko Case, The Sadies are masters at mining roots music and making it their own. But where Case turns everything she touches to gothic gold, The Sadies take a more cosmic approach, adding surf, rockabilly and psych flavors to their spaghetti western stew. The band’s fifth studio album mixes all of those elements on a dozen cinematic songs like “Anna Leigh” and “What’s Left Behind.” Dallas and Travis Good pick and harmonize their way through the material like only badass brothers can.