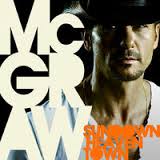 It’s no secret that McGraw’s a family guy. He and his wife, Faith Hill, are country music’s most glamorous power couple, but McGraw loves nothing better than kicking back with Faith and their three teenage daughters. Not surprisingly, the 13th studio album from the Grammy-winning singer and actor (Country Strong) is full of such downhome ballads as the mandolin-laced “Sick of Me,” and the dreamy “Diamond Rings and Barstools,” sung with his cousin Catherine Dunn. Even uptempo numbers like “City Lights” and “Shotgun Rider” conjure up folksy images of a country boy besotted with the girl riding next to him in his pickup truck. The album’s highlight is “Meanwhile Back at Mama’s,” a duet between Mr. and Mrs. McGraw which gets unabashedly nostalgic about the comforts of home. “The porch light’s on, come on in if you wanna,” they sing sweetly, “supper’s on the stove and beer’s in the fridge.” Like McGraw’s latest feelgood album, it’s an invitation that’s hard to resist.