Usher - Looking for Myself 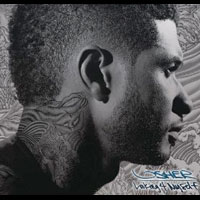 There’s never a dull moment in Usher’s world. The Atlanta crooner, one of the world’s top-selling artists and Justin Bieber’s mentor, is currently going through a custody battle with his ex-wife Tameka Foster. Usher will also be fighting in the upcoming movie Hands of Stone, appearing as boxer Sugar Ray Leonard. As if that wasn’t enough, the 33-year-old star, now romantically linked to his manager, Grace Miguel, is making music he calls “revolutionary pop.”

Usher’s new album certainly breaks fresh ground. The Diplo-produced “Climax,” which explores a relationship’s torturous end, mixes r&b and electronic music into a future soul sound. The title track, featuring Empire of the Sun’s Luke Steele, moves Usher firmly in a pop direction, while the Max Martin-produced “Scream” is a relentless club-banger. Even the tracks with the Neptune’s’ Pharrell (“Twisted”) and rapper Rick Ross (“Lemme See”) put a modern twist on classic r&b. More eclectic than ever, Usher remains a man full of surprises.