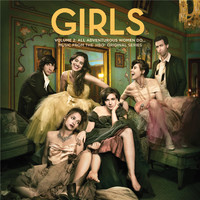 Music is central to Lena Dunham’s acclaimed TV series, about the post-college lives of four young women. So it’s natural that its second soundtrack sounds a lot like the personal playlist of Hannah and her friends. Where the last mixtape featured everything from Robyn’s buoyant “Dancing on My Own” to Icona Pop’s trashy “I Love It,” the latest is a heady mix of indie-pop old and new. Oasis’ 1995 classic “Wonderwall” sits comfortably alongside a recent remix of Cat Power’s “Free,” Beck’s new “Blue Moon” and Vampire Weekend’s update of Bruce Springsteen’s “I’m Going Down.” In keeping with Hannah and her galpals’ soul-searching, there’s introspection in Aimee Mann’s “How Am I Different” and moments of refreshing self-awareness in “Late Comer,” from Lily Allen’s forthcoming album, and “Completely Not Me,” an exclusive, bracingly honest song from Jenny Lewis. As eclectic as Girls’ eccentric characters, the soundtrack more than lives up to the show’s adventurous billing.