Mild-mannered and moderate, Canadians are generally wary about wrapping themselves in the flag. But Stompin' Tom Connors is unabashed about his patriotism. When the country singer hit the stage last week in Owen Sound, Ont. - his first concert in 13 years - the backdrop was a giant Maple Leaf. As the flag unfolded across the back of a high-school auditorium in the Georgian Bay community, 190 km northwest of Toronto, Connors walked onstage, and the packed audience of 700 greeted him with a standing ovation. Gaunt-faced, wiry and dressed from Stetson to boots in black, the 54-year-old musician from Skinner's Pond, P.E.I., looked more like a villain from a western than a defender of Canadian culture. But when he broke into his opening tune, Around the Bay and Back Again, with its references to the Georgian Bay locales of Tobermory, Collingwood and Owen Sound itself, his role as a champion of his country became clear.

When Connors stopped performing and recording in 1976, he condemned the music industry's lack of support for Canadian talent. Some of his fans treated his disappearance from the music scene as a national tragedy. Such celebrities as Morningside host Peter Gzowski and comedian Dan Aykroyd publicly pleaded with him to return. Many were puzzled that he left at the peak of his career, with a dozen top-selling albums to his credit. But the fact that Connors chose to turn his back on success only added to his mystique. He retired to a quiet, low-profile existence in an undisclosed southern Ontario location with his wife, Lena (a former go-go dancer whom Connors married on CBC TV's Elwood Glover Show in 1973), and their son, Tommy, now 14. And he became a cult figure, worshipped by younger fans who admired his honest brand of music and his rebel stance. 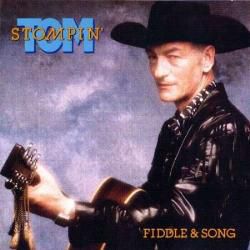 His comeback began two years ago, but it has been a gradual process, with Connors remaining wary of the limelight. First, he performed several times on Morningside in 1988. Then, he agreed to appear on the 1989 CBC TV special, k.d. lang's Buffalo Cafe. And, in an indication of his continued appeal, Toronto-based Capitol Records last year signed Connors to a deal that includes reissuing 14 of his 35 albums, as well as the re-release last fall of his latest record, Fiddle and Song, which had appeared a year earlier on an independent label. Now, with a 70-date national tour, which opened in Owen Sound and will take him to towns and major cities from coast to coast over the next six months, Connors appears ready to resume his role as a troubadour for ordinary Canadians. Said Capitol's president, Deane Cameron: "The guy is a national treasure. Like the Group of Seven, he captures the essence of Canada."

There have always been detractors who ridiculed Connors's crudely rhyming tunes about miners, fishermen and truck drivers. But at the Owen Sound show, the crowd clearly adored his distinctive style - the nasal voice, comic facial expressions and trademark boot-pounding, from which he got his nickname. He has performed with his own plywood "stompin' boards" ever since a hotel owner complained about the wear on his carpet. Last week, when he sang his popular Sudbury Saturday Night ("Well, the girls are out to bingo/And the boys are getting stinko/And we'll think no more of Inco/On a Sudbury Saturday Night"), two young men came up from the audience with their own boards to stomp along.

Connors sang many of his old favorites, including Big Joe Mufferaw, about a Paul Bunyan-type logger from the Ottawa Valley ("They say Big Joe drank a bucket o' gin/And he beat the livin' tar out of 29 men"), and Bud the Spud, about a potato-hauling truck driver ("The spuds are big/On the back of Bud's rig/They're from Prince Edward Island"). He also offered more recent numbers, such as his tribute, Lady k.d. lang ("Her main claim to fame was how she sang with a twang/And jumped around like a 'rang-ee-tang"). Towards the end of the two-hour concert, the enthusiastic audience clapped and sang along as Connors performed requests. Afterward, the musician spent almost an hour signing autographs. Said Owen Sound riding stable operator Joan MacDonnell: "He tells stories in his songs that help you to laugh at yourself." Declared another audience member, Owen Sound ambulance driver Rick Ribbel, 36: "He has flair - someone who's totally true to himself."

Connors embarked on his current tour with two conditions: no radio stations as concert presenters and no interviews with the media. According to tour organizers, he feels that the media have trivialized his crusade to Canadianize the country's airwaves and its music industry. But between sets in Owen Sound, he agreed to talk to Maclean's. The flinty-eyed Connors sat with a cigarette and a can of cold beer in his Winnebago parked behind the auditorium, discussing the reasons for his comeback. He acknowledged that he would have been happy to continue living comfortably off his record royalties, but he said that a member of his generation needed to take a stand on some critical issues facing Canada, to set an example for young people. Said Connors: "There's a feeling out there, especially after free trade, that if we don't find roots fast we're going to be uprooted." He added: "I'm not saying keep the Americans out. Just give Canadians their due - and we're overdue for that." 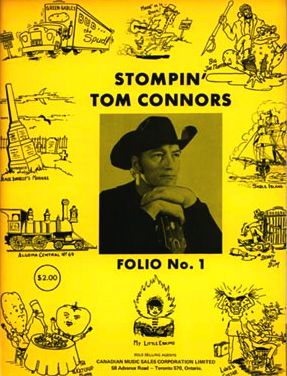 Between songs in the concert, Connors frequently promoted domestic talent. At one point he said, "Anyone with a few ounces of Canadianism is better than 150,000 lb. of Americanism any day." And he said that his entire band, crew and tour organizers are all Canadian. By reviving his campaign on behalf of the country's performers, Connors is likely to once again become a thorn in the side of the entertainment industry. He says that when he hosted Stompin' Tom's Canada, a half-hour country music show, which aired on CBC TV in the 1974-1975 season, he ignored the producers' requests to feature some American guests. As a result, he says, he was never asked to do another show.

Then, in 1975, Connors boycotted Toronto's Canadian National Exhibition when he learned that he was going to be paid $2,500 for a two-hour concert while American country singer Charley Pride received $35,000 for performing six songs. And when he stopped performing the following year, he returned all seven of his Juno Awards because, he said, the music industry was honoring too many "border jumpers," Canadian artists who lived and worked in the United States.

The main object of his scorn remains Canadian radio, which he says is still guilty of not giving proper exposure to music that he describes as "identifiably Canadian." He began a campaign in 1986 to persuade radio stations to increase their Canadian content, releasing Stompin' Tom Is Back - to Assist Canadian Talent (A.C.T.), an album featuring three of his own compositions as well as unknown artists singing their own material. The record was accompanied by a manifesto urging consumers to send the album to their local radio station, and then to request that the station play the songs. If the stations refused, Connors said that supporters should organize petitions or boycotts. The campaign failed, in part because he refused to give interviews to promote the record. Still, he says that he intends to continue the fight. "The industry thought I'd just spout off and then go away. Now that I'm back, I'm going to keep on talking. They say you get older and mellower, but, by Jesus, I'm just the same way [I've] always been."

His critics in the music business call him a crank. And even some of his friends, including Peterborough, Ont., radio disc jockey Sean Eyre, who is helping to promote the current tour, say that Connors has a childlike naivete. Eyre acknowledges that he refused to play Connors's music in 1965 because, he now recalls, he thought that the lyrics could have been written by a grade-schooler. But, as Connors began to win national acclaim, Eyre says that he reconsidered the music. And he adds that, like many others, he admires Connors for his principles and single-mindedness. "Everyone has a price," said Eyre, "but not him. He can't be bought - he's true-blue."

Connors's early life was racked by uncertainty. The son of a transient teenage mother and a father he never knew, Connors was placed by the Children's Aid Society in an orphanage in Saint John, N.B., when he was about four. He once told the poet Alden Nowlan in an interview that orphanage staff "beat hell out of me, and everybody else, with leather straps and bamboo canes and whatever else they could lay their hands on. And if they couldn't find anything to hit you with, they grabbed you by the hair and almost twisted your head off."

Three years later, Connors was adopted by a family in Skinner's Pond, P.E.I. But when he was 13, he ran away and, armed only with a Grade 9 education, went to work on the Saint John docks. Later, he bought his first guitar while hitchhiking through Eastern Canada, and worked picking tobacco and digging graves. Then, in 1964, in Timmins, Ont., he found himself a nickel short for a beer at the Maple Leaf Hotel. The manager, Gate Lepine, told him he could make up the difference singing a few songs with his guitar. 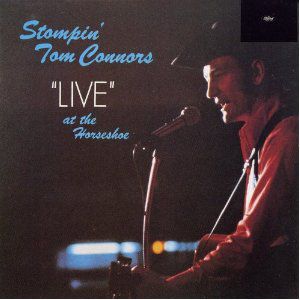 That performance led to a 14-month run at the Timmins hotel - and to Connors's rising fame. He began recording singles, including Tillsonburg, about the misery of Ontario's migrant tobacco workers. Soon, Connors was performing in a Toronto bar and, eventually, in 2,750-seat Massey Hall. By 1971, Connors could afford to team up with partner Jury Krytiuk to form his own successful company, Boot Records, and to release albums by other Canadian artists.

Connors's 10 years of stardom were followed by at least as many away from the stage. But he says that he has thoroughly enjoyed that period of retirement. "I've been drinking a lot of beer, smoking a lot of cigarettes and writing some songs," he said. Singer Tom Gallant, the opening act on the current tour, adds that Connors has been "throwing great parties, playing chess, writing songs and singing for friends until sunrise."

But in Owen Sound last week, Connors's energy and spirit made it seem that he had never abandoned the concert stage. By the time he sang his ribald Muktuk Annie three-quarters of the way through the concert, he had already reduced his stompin' board to splinters. At the end of the show, he launched into his battle-hymn-like Unity for All, solemnly singing the chorus, "The maple leaf is unity/Means the flag will never fall."

As Connors left the stage, walking behind the Canadian flag, the crowd gave him another standing ovation. When he came back out for an encore, he gave the Owen Sound audience what he knew they wanted: another rendition of Around the Bay and Back Again. As he takes his show across Canada this summer, Stompin' Tom will be sweetening his patriotic message in a similar way: the man from Skinner's Pond claims to have a song for almost every town on the tour.