Deputation to Community Council - on the Sam the Record Man sign 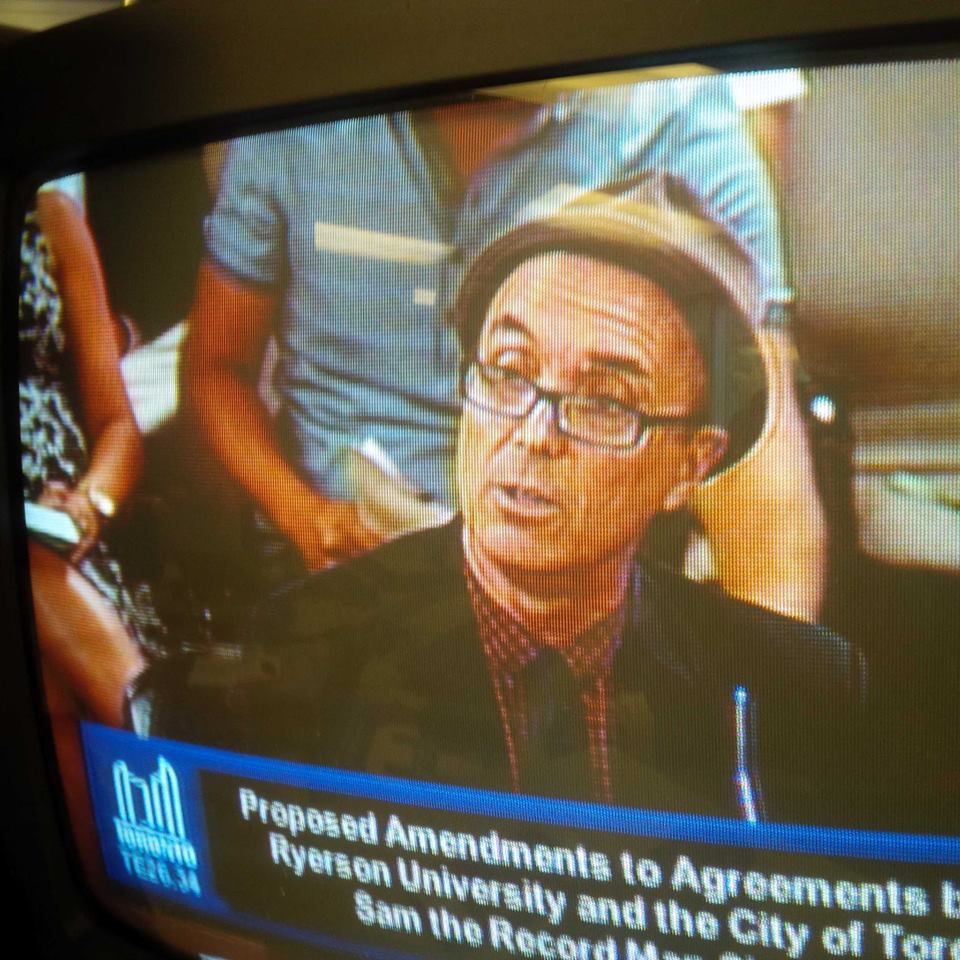 Speaking in opposition to TE26.34 (Proposed Amendments to Agreements between Ryerson University and the City of Toronto - Sam the Record Man Signage)

My name is Nicholas Jennings. I am a journalist, historian and a graduate of Ryerson. I have spent my entire career writing about music, including books, TV documentaries and, for 20 years, as feature writer and reviewer for Maclean’s magazine. One of my books, Before the Gold Rush, focused on the history of Toronto’s music scene in the 1960s, especially that of the Yonge Street Strip. I also lead walking tours, exploring the Strip’s musical history.

Yonge Street from Queen to Gerrard during the 1950s and ’60s was a hotbed of entertainment and the entire stretch was lit by the dazzling neon signs of dozens of live music clubs, all featuring local and international jazz, blues, country, soul and rock and roll acts.

At Queen, there was the Town Tavern, featuring jazz giants like Lester Young, Stan Getz and Canada’s own Oscar Peterson, who recorded his classic album On the Town there in 1958.

A little up the way, there was the Colonial Tavern, which opened in 1947 with Canada’s first all-black swing band, Cy McLean’s Rhythm Rompers, and went on to feature jazz greats like Miles Davis and Thelonious Monk and blues legends like B.B. King and Muddy Waters.

Friar’s Tavern, where the Hard Rock Café now stands, was the scene of Bob Dylan rehearsing local heroes Levon & the Hawks as his backing band in 1965, an occasion that Time magazine called “the most decisive moment in rock history.”

At the northeast corner of Yonge and Dundas stood the Brown Derby, featuring comedians, bands like Joe King & the Zaniacs and an eye-catching row of giant showbill posters lining the windows along Dundas.

On the current site of the HMV store sat Le Coq D’Or, a three-storey live music emporium where rockabilly rascal Ronnie Hawkins held court and shared the stage with such stars as Bo Diddley, Ike & Tina Turner, Funkadelic and the Kinks.

Next door at the Edison Hotel, a heritage building that was sadly destroyed by arson in 2011, you could catch the likes of Cab Calloway, Bill Haley, Carl Perkins and the Everly Brothers.

The Zanzibar was home of the Frank Motley & the Hitchhikers and a talented Little Richard-like singer named Jackie Shane, a cult star whose legend continues to grow.

And the Bluenote was an after-hours club that featured visiting stars like the Righteous Brothers and Motown’s Stevie Wonder and Diana Ross of the Supremes.

Only the Zanzibar still operates, although it is now just a peeler bar playing recorded stripper music.

Yonge Street was the birthplace of the Toronto Sound, the fusion of r&b and rock made famous by local bands like the Mandala, Steppenwolf, Jon and Lee & the Checkmates, David Clayton Thomas & the Shays and the group that went on to become world famous, known simply as The Band.

Here’s what Rock and Roll Hall of Famer Robbie Robertson, of The Band, has to say about that era: “Toronto was a Mecca of talent in the 1950s and ’60s. It was the centre of Toronto’s nightlife and entertainment. There should be more of an effort to preserve that centre. Yonge Street shouldn’t become a discarded part of the history of the city.”

Nor should it be sanitized as to eradicate all traces of that era.

Toronto needs reminders of Yonge Street’s rich cultural past. The Sam’s neon sign is just that kind of reminder. It stood smack in the middle of the Yonge Street Strip, casting a glow that drew millions to its three creaky, uneven floors, which were decorated with posters, promotional banners, autographed artist photos and contained aisle-upon-aisle of 400,000 records across all genres. Visiting artists from Liberace and Tony Bennett to Elton John and Alice Cooper frequented the store, while the diversity of Sam’s selections became a vital source of influence for many Canadian musicians.

The Sam’s neon sign was a landmark for Torontonians and visitors alike, and was certainly the most identifiable symbol of Toronto until the CN Tower came along. Its preservation and resurrection on Yonge Street would be an entirely appropriate way to recognize the city’s past in an ultimately very cool way. And, as a friend of mine put it, it sure beats a tombstone in the sidewalk and a brass plaque on the wall (although a plaque would provide the sign with some useful contextual explanation).