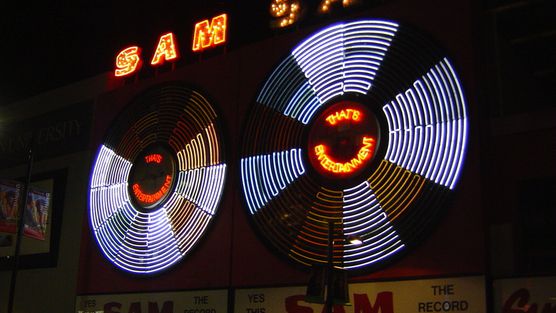 The Citgo sign near Fenway Park in Boston. The old neon lights that lit up the sign for years (L) have been replaced by much brighter LEDs, the glowing chips found in digital clocks. Officials say the sign will stand up to the tough New England weather.

Re: Preservation of iconic signs is admirable, but not at the expense of common sense (Sept. 12)

Ryerson knew full well the challenge it faced with the Sam the Record Man sign, but chose not to embrace it. The university's agreement with the city, dated August 15, 2008, stated that it would use "reasonable best efforts to identify an opportunity to incorporate the signs on Yonge Street." There is no evidence that "best efforts" were made. It appears Ryerson never directed its architectural firm to include the sign in any of its plans at any stage. This is disappointing, because Ryerson has an opportunity to honor the spirit of its agreement with the city and demonstrate it is a good and creative downtown neighbor (the way it has been with Maple Leaf Gardens).

If Ryerson or the city planning department's Heritage Preservation Services want to find ways to incorporate the sign, they only have to consider innovative cases of neon restoration in other cities, such as Boston's Citgo sign near Fenway Park. Ryerson president Sheldon Levy has stated: "We have always said that we will put it up if that's what the people of Toronto want." Mr. Levy and city councilors should be listening to the widespread support for the restoration of the Sam's sign on Yonge Street.