Ecological Rock: Pop Musicians Sing Out to Save the Planet It resembled the historic Live Aid concert of 1985: a global jukebox featuring some of the world's top musicians performing for a cause. And like the original world benefit for African famine relief, the event was broadcast to an audience expected in advance to number one billion viewers in more than 100 countries.

The five-hour broadcast featured prerecorded messages of environmental oncern from political leaders, including Canadian Prime Minister Brian Mulroney, and from people in cities around the world. But unlike Live Aid, which collected $250 million, the purpose of the event was to raise not money but awareness - about environmental issues ranging from acid rain to the earth's depleting ozone layer. Said Sting, who last month completed a 14-country world tour with Amazon Indian chiefs on his campaign: "We are really talking about the quality of our lives - the air we breathe and the water we drink - without which there is nothing." 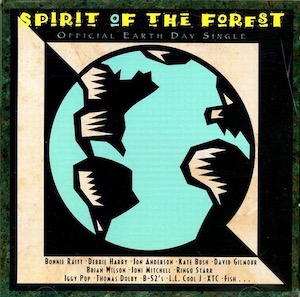 That commitment among rock stars reflects mounting public concern about the health of the earth. Indeed, since the African famine cause, no issue has galvanized the pop-music world on such a scale. This week, to coincide with World Environment Day on June 5, British-based Virgin Records is releasing "Spirit of the Forest," a pro-ecology fund-raising song that features more than 60 performers, including Ringo Starr, Joni Mitchell and Iggy Pop. On June 11, Alberta-based cowboy singer Ian Tyson hosts a concert with Canadian folksingers Gordon Lightfoot and Murray McLauchlan to fight the proposed damming of the Oldman River in the south of Tyson's home province.

The concert is a benefit in support of an organization called Friends of the Oldman River, which claims that the damming will cause an ecological crisis. And next week, London-based Greenpeace will launch a double album titled Rainbow Warriors, featuring such top artists as U2, Sting, Peter Gabriel, Eurythmics and Vancouver's Bryan Adams, with a news conference at the United Nations headquarters in New York. It retails in Canada for $14.98. The benefit recording for the international environmental group was first released last March in the Soviet Union to mark Greenpeace's successful negotiations with the Kremlin to open a branch in Moscow next year.

Of all the pop artists crusading for the environment, Sting, 37, has shown the greatest commitment. A veteran activist, he has already taken part in both Live Aid and the 1988 London tribute concert for jailed black South African leader Nelson Mandela. He was also involved in an international and an American tour in support of the human rights organization Amnesty International. When Sting first heard about the plans for Our Common Future, he expressed disinterest, claiming that he was "burned out." And he told Maclean's in a recent interview that he was "bored to death by the idea of concerts for causes." He added: "Really, what it's now about is talking, dialogue, information." 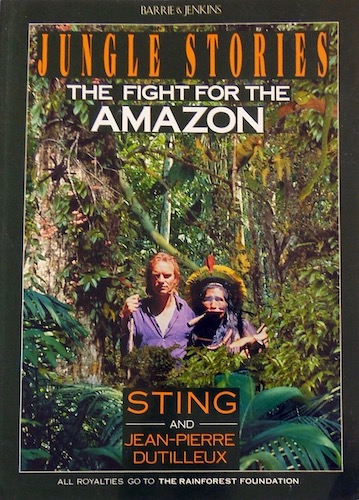 Sting eventually did agree to perform, in order to gain another platform for his rain forest campaign. But his attempt to spark discussion has taken the form of a glossy, 128-page book entitled Jungle Stories: The Fight for the Amazon (Little, Brown, $19.95), published in Canada last month. Featuring 100 color photographs by Belgian film-maker Jean-Pierre Dutilleux, it chronicles Sting's growing interest in the Brazilian rain forest and one of the largest tribes, the Kayapo Indians. The book is a fund raiser - the target is $3.5 million - for The Rainforest Foundation, a group set up by Sting and Dutilleux to generate popular interest in preserving 72,000 square miles of Brazilian jungle (an area roughly the size of Belgium, Holland, Switzerland and Ireland combined) from logging and farming.

During a news conference to promote his book in Toronto last month, Sting sat with three Kayapo chiefs, including Raoni - a startling figure dressed in a yellow parrot-feathered headdress and wearing a wooden plate in his lower lip signifying his status as a warrior. The four cited scientific claims that because rain forests remove carbon dioxide from the atmosphere and release oxygen and moisture, deforestation will lead to a worsening of the so-called greenhouse effect - where the earth undergoes a warming trend due to pollutants in the atmosphere, which would lead to global drought. Later, in the interview, Sting pointed to the foggy skyline outside his hotel room window and said. "This is not normal weather for May." Running his fingers through his long hair, he added: "It's the same everywhere you go. The weather is totally messed up and I think the rain forest is one of the reasons."

Along with offering warnings about the greenhouse effect, participants in the Our Common Future event sang out against acid rain, the hazards of nuclear power and threats to wildlife. The show, produced by Hal Uplinger and directed by Tony Verna - the American team responsible for the Live Aid broadcasts - was the brainchild of Warren Lindner, a American lawyer who was secretary for the World Commission on Environment and Development from 1984 to 1988, which operates under the auspices of the United Nations. Lindner told Maclean's that he hoped the show might encourage what he called such small but important steps at the community level as recycling waste and planting trees. Said Lindner: "People can make a difference. With all the existing resources, we have never had a greater opportunity to turn it around."

A similar optimism is featured in the record "Spirit of the Forest," which was released last week as a single and a video in Britain and the United States (there are no current plans for a Canadian release). Against a backdrop of chimpanzee squeals and elephant calls, artists including Starr and Mitchell sing of the threat to the jungle, but keep returning to the upbeat refrain, "You'll never break the spirit of the forest." The double album Rainbow Warriors - named for the Greenpeace ship that was sunk in 1985 by the French intelligence service in the port of Auckland, New Zealand - is more varied in tone. It features 31 previously recorded songs by some of rock's most popular artists. The tracks include Peter Gabriel's "Red Rain," Eurythmics' "When Tomorrow Comes" and R.E.M.'s "It's the End of the World." The performers agreed to donate their royalties from the record to Greenpeace, which has already sold one million copies in the Soviet Union and hopes to reach total sales there alone of four million, despite its price of 10 rubles ($20) - one-fifth of the average Soviet weekly wage. When it was released there in March, an album-signing session in a Moscow record store turned into a near-riot as Soviet fans rushed to get close to Gabriel, Eurythmics singer Annie Lennox and U2's guitarist, the Edge. 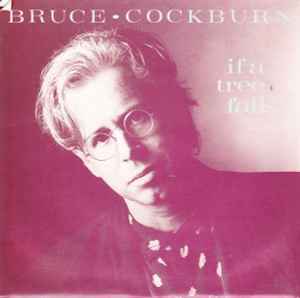 Canadian pop artists are also campaigning to preserve the environment by saving forests. Last month in Toronto's Convocation Hall, the Temagami Wilderness Society sponsored a benefit concert featuring Lightfoot, McLauchlan, Cowboy Junkies and Marie-Lynn Hammond. The show drew a capacity crowd of 1,700 and raised $50,000 toward the group's campaign to prevent logging in a forest near the Northern Ontario town that includes some of the world's oldest red and white pine trees. And a group campaigning against the proposed logging of British Columbia's Stein Valley - located 125 km north of Vancouver - will hold its sixth annual festival in the nearby town of Pemberton in August with a concert featuring Lightfoot and Bruce Cockburn. Said Cockburn, who campaigns for rain forests in his hit single "If a Tree Falls": "The thing about logging, it's short-term, quick-buck planning that doesn't take into account what happens 20 years down the line, when there are no trees at all."

Increasingly, artists campaigning for forest protection are linking the cause to native land claims. Like Sting, who ways that he believes the Brazilian rain forest can only be saved by respecting Kayapo Indian territory, some Canadian musicians are aligning themselves with native people. Cockburn, for one, joined the Haida Indians of British Columbia's Queen Charlotte Islands on two occasions in 1987 in their efforts to block the logging of virgin rain forest. Many native groups in North America share the belief that one day the people of the world will unite as "warriors of the rainbow" to save the planet from destruction. And growing numbers of rock musicians who are taking up the environmental cause, including those who sang in Our Common Future, have already joined that crusade.