Revival 69 - The Concert that Rocked the World There are seminal events in music history, seismic shifts that occur when forces of personality, timing and circumstance collide to create something truly monumental. Sometimes, they are individual moments, like when Chuck Berry wrote his genre-defining “Maybelline,” John Lennon met his future collaborator Paul McCartney or Bob Dylan plugged in and launched a musical revolution.

Other times, the milestone involves a gathering such as Woodstock or the Harlem Cultural Festival, known informally as the Black Woodstock, which became the subject of the recent award-winning documentary Summer of Soul. Both of those events took place in 1969, a year that saw a flurry of festivals; that summer also included Isle of Wight and Atlanta International Pop.

The summer of ’69’s first big festival was Toronto Pop, a two-day extravaganza of 25 artists at Varsity Stadium, with Sly & the Family Stone, the Band, Chuck Berry and Steppenwolf headlining. The festival’s promoters, John Brower and Ken Walker, made a killing on the gate receipts. Flushed with success, they promptly planned a followup in September. 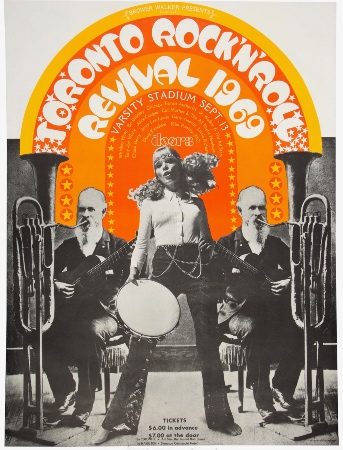 Using Chuck Berry again as the inspirational starting point, Brower and Walker built a festival bill for that included other pioneering rockers, from Little Richard and Jerry Lee Lewis to Bo Diddley and Gene Vincent. But, faced with unexpectedly poor ticket sales, the pair soon added Alice Cooper, Chicago and the Doors. It was only when Brower pulled the proverbial rabbit out of his hat and somehow convinced John Lennon to join the roster, with Yoko Ono, Eric Clapton and the Plastic Ono Band, that financial disaster was averted.

In fact, the Toronto Rock ’n’ Roll Revival, held on September 13 at Varsity Stadium, became one of the most historic music events of all time—the second only after Woodstock, according to Rolling Stone magazine.

Peter Goddard and Ritchie Yorke, two Canadian rock critics who both attended the Revival, each reflected on its significance years later. Goddard wrote that the Revival was “one of those remarkable moments in the history of a particular art form when many of the major players were together, met, talked and, in some cases, collaborated.” He added: “It was a real-time version of a time capsule.”

Yorke, who had a hand in Lennon’s involvement (more on that later), saw the Revival as a watershed moment for the world’s most famous musician. “It was this concert,” observed Yorke, “that finally convinced John there was indeed another life beyond the Beatles.” A week after the festival, Lennon told the Beatles he was done. The biggest band in the world was breaking up.

The full story of how history was made that day is now captured vividly in Revival 69, a documentary that unspools like an edgy thriller, creating palpable tension and genuine excitement as we join a nervous Lennon, a frenzied Brower and renowned American filmmaker D.A. Pennebaker on what amounts to a crazy roller-coaster ride. Director Ron Chapman combines new and archival interviews with Pennebaker’s original footage of the concert. He also makes clever use of colourful animated segments by Mathew den Boer to recreate the times.

Much of the narrative is carried by Brower, who’d frantically wheeled and dealed to assemble the star-studded lineup—only to see it threaten to come crashing down and put his life in jeopardy with Edjo Leslie, leader of the Vagabond motorcycle gang, who’d bankrolled him. Along the way, we get recollections from Alice Cooper, his manager Shep Gordon, the Doors’ Robby Krieger, rock critic Robert Christgau, Edjo himself and two members of the Plastic Ono Band: bassist Klaus Voormann and drummer Alan White. We also hear from Rush’s Geddy Lee and disco star Claudja Barry, who’d both been in the audience.

Lennon’s side of the story is conveyed by archival tape recordings with the man himself and den Boer’s animations. Anthony Fawcett, who worked for Lennon’s and Ono’s Bag Productions, is an engaging interview subject, wine glass in hand, as he recounts being the go-between between Lennon and Brower with the last-minute arrangement on long-distance phone calls. As luck would have it, Yorke, critic for The Globe and Mail, was in the Apple office in London for an interview with George Harrison. He vouched for Brower and Walker and encouraged Lennon to do the Toronto concert.

Clapton coming on board for the concert sealed the deal for Lennon, who’d started getting cold feet. When the Plastic Ono Band finally boarded the 707 jet for Toronto, Fawcett and Voormann tell how the group used their time on the flight to draw up the playlist and rehearse songs they’d never played together before as a group.

Back in Toronto, Brower, ever the creative hustler, arranged for the Vagabonds to provide an escort of 80 motorcycles from the airport to Varsity Stadium. The documentary includes Pennebaker’s wild shots of the bikers escorting Lennon’s limousine and then fiercely partying afterwards with the crowd at the concert (some of this footage appeared in the 2011 TV documentary series Yonge Street: Toronto Rock & Roll Stories).

Pennebaker’s original footage first appeared in his own film Sweet Toronto and there have been numerous albums cut from the audio recordings, including the Plastic Ono Band’s Live Peace in Toronto 1969. But Revival 69 offers Pennebaker’s never-before-seen Super 8 behind the scenes verité footage as well as newly discovered concert footage.

Viewers get to see Alice Cooper’s unhinged, career-making performance. Claudja Barry, famous for her “Boogie Woogie Dancin’ Shoes” hit, tells viewers she found Cooper “scary, like watching an axe murderer in a movie.” After sending feathers from a pillow aloft from the stage, he was handed a live chicken which he proceeded to throw into the audience. The next day a newspaper reported Cooper had bitten off the chicken’s head, cementing his reputation as a devil-worshipping rocker. Cooper has been laughing all the way to the bank ever since.

Some of the documentary’s funniest moments come with Chuck Berry’s duckwalking appearance and his backing by guitarist Hughie Leggat and drummer Danny Taylor, of the local band Nucleus. As the Toronto musicians explain, they were recruited to back Berry at the last minute and had zero rehearsal time. Says Taylor: “We had absolutely no clue what was going to happen from one song to the next—it was crazy.” But they acquitted themselves admirably and Leggat recalls seeing the Doors’ Jim Morrison watching them from the side of the stage. Afterwards, Berry took his erstwhile backing musicians for burgers, across the street at Harvey’s.

Little Richard, as always, is a scene stealer. Dressed in a mirrored vest, he dazzles like a disco ball, tearing his way through classics like “Good Golly Miss Molly” while dancing on his piano with unbridled energy. As the Doors’ Krieger recalls after watching Little Richard’s performance: “Jim [Morrison] turned to me and said, ‘We have to follow that?’” By the way, the Doors’ appearance in the concert is not included and has never been seen, something Krieger suspects was Morrison’s doing.

Revival 69 climaxes with Lennon and the Plastic Ono Band taking to the stage. Something remarkable happens at that moment, in keeping with the historic nature of the group’s first public performance: Sunset Strip Svengali and certified madman Kim Fowley, one of the concert’s MCs, asks the audience to flash their lighters, creating a sea of flickering stars in the dark and launching a concert-going phenomenon that continues today with cell phones. 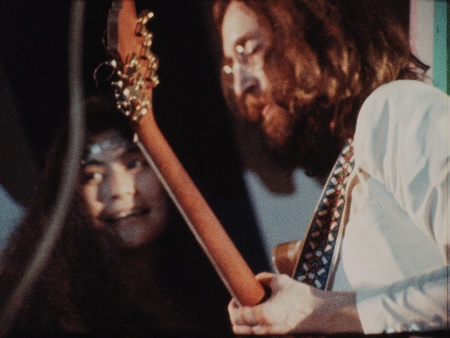 As Lennon, Ono, Clapton, Voormann and White opened with “Blue Suede Shoes” and debuted new songs like “Cold Turkey” and “Give Peace a Chance,” Geddy Lee recalls his reaction as a stoned suburban kid in the audience (he’d dropped acid beforehand). “It was a kind of awe,” said Lee, “the light shining from John Lennon left you with your jaw dropping. He was a Beatle and that had an aura about it, the fact that we were in the same vicinity as him and he was playing for us.”

Miraculously, Brower had pulled it off—much to his own disbelief. “Did the Rock ’n’ Roll Revival really happen?’ he asks at one point in the documentary, sounding as if the whole thing was a dream. “Was John Lennon really here last night? It was so under the radar, almost a non-event, until all of a sudden it was the biggest thing in the world.”

That Toronto festival, which almost never happened and nearly came off the rails several times, is now the stuff of legend. Revival 69 ensures that its story lives on in the collective memories of both music fans and the city where this incredible history was made.