In February 1968, Ian and Sylvia made a pilgrimage to Music City, home of the Grand Ol’ Opry, to record their Nashville album with session cats like Fred Carter, Jerry Reed and Harold Bradley. The Byrds hadn’t yet arrived to make their Sweetheart of the Rodeo album and it would be a full year before Bob Dylan showed up to record Nashville Skyline. After years of being overlooked, Ian and Sylvia’s Nashville is now finally recognized as the first pop-country crossover album. Both it and the subsequent Full Circle paved the way for the duo’s landmark country-rock album, Great Speckled Bird, recorded in Nashville with Todd Rundgren as producer. “With [those albums],” said Ian, “we found our direction.” 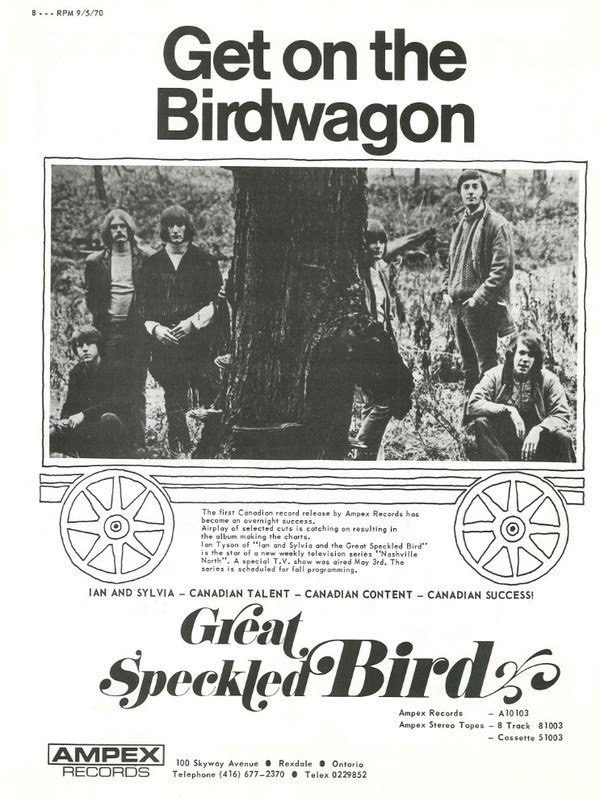 The original Great Speckled Bird was a crackerjack band consisting at various times of such exceptional players as Amos Garrett, Ben Keith, Ken Kalmusky, Ricky Marcus, Buddy Cage, N.D. Smart, Jim Colgrove, Jeff Gutcheon, Pee Wee Charles and David Wilcox. The group appeared with Ian and Sylvia on the famous Festival Express tour and then joined them on prime-time television, when Ian landed hosting duties on Nashville North, later renamed The Ian Tyson Show. It was a radical hybrid. As singer-songwriter Tom Russell put it: “Ian and Sylvia added a rock-and-roll drummer, an electric guitar and pedal steel to their show, changed the rules and blew out the speakers.”

The stellar musicianship of Great Speckled Bird shines through on The Lost Tapes, a two-CD set that came out in 2019. Ben Keith, who famously played on Patsy Cline’s “I Fall to Pieces,” graces Ian and Sylvia’s sumptuous harmonies with his elegant pedal steel on “Heartaches By the Number.” Pee Wee Charles, who became Gordon Lightfoot’s pedal steel player, duels briskly with guitarist David Wilcox, who replaced Garrett, on a rousing rendition of “Crazy Arms.”

Meanwhile, the voices of Ian and Sylvia—Ian’s warm and smooth as leather, Sylvia’s cool as the night air—shine throughout. Ian’s tenor soars on Lefty Frizzell’s “That’s the Way Love Goes” and soothes on Utah Phillips’ “The Goodnight Loving Trail.” No wonder Townes Van Zandt once said, “We all wanted to write like Hank Williams and sing like Ian Tyson.” Sylvia is a convincing chanteuse on “Crazy Arms” and her version of Lucille Starr’s “The French Song,” singing both songs in French in her beguiling alto. And she and Starr duet like a pair of honky-tonk angels on Buck Owens’ “Crying Time” and the country classic “Silver Threads and Golden Needles.”

Of his and Sylvia’s role with Great Speckled Bird as country-rock pioneers, Ian once said: “We were 10 years ahead of our time—us, Gram Parsons and the Byrds. The public just wasn’t ready for the modern country thing.”