Ellen McIlwaine was the epitome of an adventurous spirit: fierce and independent, the flame-haired artist took her musical gifts in surprising directions, defying expectations at every turn. As a virtuoso slide guitarist with a seismic voice, she excelled in a male-dominated field, leading her bands with a bold musical style that transcended genre and culture.

“There is a deep well of the music spirit that lives in me and comes out when I play,” Ms. McIlwaine told interviewer Paul Corby in 2019, when she was awarded a Lifetime Achievement Award by the Toronto Blues Society. “I think a lot of people play with me and through me, and sing with me and through me. It’s really a mystical experience.” One of those she channelled was Jimi Hendrix, a friend from their Greenwich Village days whom Ms. McIlwaine credited with teaching her that what she had to express was unique. Another was Johnny Winter, from whom she learned to create her own unconventional open tunings. 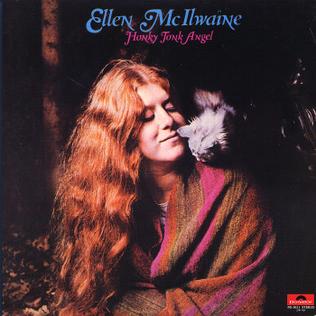 Her musical expression wasn’t restricted to blues, rock or funk but drew from a strong affinity for jazz, folk, country and what came to be called world music, developed while attending an international school in Japan and growing up with families from around the world. Ms. McIlwaine, who became fluent in Japanese, absorbed all those cultural influences and incorporated them into her recordings. Her most recent album, 2006′s Mystic Bridge, was a collaboration with Canadian tabla player Cassius Khan.

Loud, powerful and flamboyant onstage, Ms. McIlwaine was kind, gentle and open-hearted offstage, and made friends easily wherever she went. After getting sober in 1982, she moved to Canada, living in Montreal and Toronto before settling in Calgary a decade later. There, while pursuing her career and teaching guitar and voice (including Arabic scales and yodelling), Ms. McIlwaine volunteered at the Alberta Children’s Hospital. For the last eight years, she drove a school bus – as much for her love of children as the steady income. When she died at 75 in a Calgary hospice of esophageal cancer on June 23, following a diagnosis only six weeks earlier, many mourned the loss of a revolutionary artist and generous soul.

Blues and world music legend Taj Mahal told The Globe and Mail that witnessing Ms. McIlwaine perform was, for him, a revelation. “She was the first contemporary female musician that I heard play it all, sing it all, slide and do it solo on top of all that talent,” said Mr. Mahal, who appeared on Ms. McIlwaine’s Spontaneous Combustion album in 2000. “Many a night I watched would-be guitar slingers sneak out the door of a club, coffeehouse or concert hall where she was playing because they couldn’t take the heat!” 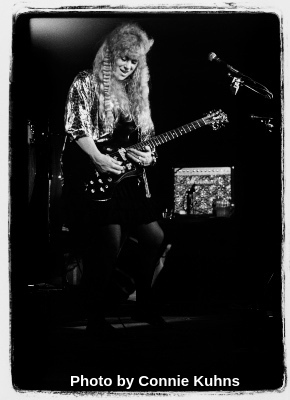 “Ellen was way ahead of her time,” said blues guitarist and singer Sue Foley, who toured with Ms. McIlwaine and interviewed her for her forthcoming book on female guitarists. “Everything she did musically was by her own design, her slide technique, open tunings and the whole thing she was doing with world music and semi-tones. She could play her ass off and sing really well with a multi-octave range. She blazed a trail for me and other women. I owe her a huge debt.”

Grammy-winning producer-guitarist Colin Linden calls her an inspirational artist: “Ellen was a pioneer who combined acoustic and electric sounds in a way no one had done before. And her singing was the perfect companion to her playing, capable of great tenderness, joy, anger and empathy.”

Meanwhile friends of Ms. McIlwaine tell of her other qualities. “Ellen was always a strong person and personality,” Sharron Toews said. “She was completely non-judgmental of everybody. It didn’t matter whether you were young or old, black or white, transgender or had no arms and legs. To her, everybody was a person – she saw through all façades.”

Ms. McIlwaine’s death came just as her career seemed to be undergoing a renaissance. She was working on her autobiography and planned to record a new album this fall. Mojo, the prestigious U.K. music magazine, just published a feature article on her titled “Still Blazing Up the Bottleneck Blues.” And Montreal filmmaker Alfonso Maiorana, co-director of the award-winning Rumble: Indians Who Rocked the World, is developing a documentary on her titled Goddess of Slide.

The only adopted child of Southern Presbyterians, Frances Ellen McIlwaine was born in Nashville, Tenn., on Oct. 1, 1945. When she was two, her missionary parents, William and Aurine, took her to Kobe, Japan, where she lived for the next 15 years, attending the Canadian Academy international school. She started playing piano at the age of five and later snare drum in the marching band while singing in the school choir. Ms. McIlwaine credited listening to the American Forces Network radio with her discovery of Ray Charles, Fats Domino and Professor Longhair.

When Ms. McIlwaine was 11, her father, who’d been born in Japan in 1893 to missionary parents himself, took her to a performance of Kabuki, the highly stylized classical form of Japanese dance-drama. “I will never forget it,” she wrote on Facebook. “It was a great privilege to be taught so many things about Old Japan.”

Returning to the U.S. in 1963, Ms. McIlwaine studied history at a Christian school in Tennessee but dropped out to take art classes in Atlanta. There, she discovered guitar and began performing at local coffeehouses; in 1966, folk singer Patrick Sky urged her to move to Greenwich Village. Ms. McIlwaine landed work at the Café Au Go Go six nights a week, opening for blues artists like Muddy Waters and John Hammond. It was there she met Mr. Hendrix, who jammed with Ms. McIlwaine during her sets; she later painted his portrait on one of her albums and covered his Up From the Skies. 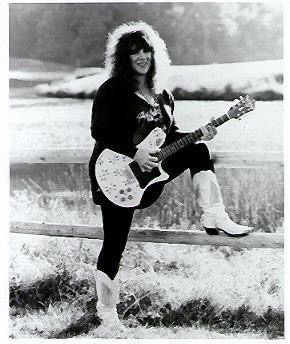 After fronting the blues rock band Fear Itself, Ms. McIlwaine went solo, garnering acclaim for her recordings. Her 1972 album Honky Tonk Angel showcased her dazzling style and featured a mesmerizing version of Blind Faith’s Can’t Find My Way Home that many critics call definitive. The following year, she released We the People, which included her song Underground River about Mr. Hendrix and the explosive title track, an Indian raga-style workout recorded live at Carnegie Hall with Ms. McIlwaine scat-singing – in Japanese, no less.

At a time when radio had freer formats, Ms. McIlwaine built on airplay and toured widely – including several dates with an unknown Tom Waits opening – and attracted a strong following. When The Guitar Album appeared in 1974, she was the only female guitarist on a compilation that included the likes of Eric Clapton, John McLaughlin, T-Bone Walker, Link Wray and Roy Buchanan. But, as Alan Niester wrote in The Globe and Mail, “with the advent of structured playlists and few risk-taking disc jockeys, she seemed to disappear from the spotlight.” Ms. McIlwaine recently told Mojo: “It’s always been a hindrance as well as an asset to be completely original.”

Ms. McIlwaine was always aware of the gender bias. When she was volunteering at the children’s hospital in Calgary, often in the cancer ward, she met Paul Brandt, who was working there. They bonded as guitarists. She told the future Canadian country star: “Well, I get called a female guitar player and I bet you get called a male nurse.”

Ms. McIlwaine decamped to Montreal in 1975. There, she recorded The Real Ellen McIlwaine with the Ville Émard Blues Band and made her next album, Everybody Needs It, with one of her biggest heroes, legendary Cream bassist Jack Bruce. One night, while appearing at the Rising Sun in Montreal, Ms. McIlwaine reconnected with an old friend, singer Lisa Hartt. “I was at a low point in my life,” Ms. Hartt recalls, “and just wanted to go out and get drunk with Ellen. But the minute I saw her I knew that wasn’t going to happen. She was absolutely glowing. Turns out, she’d gotten clean and sober. Ellen saved my life that night by introducing me to Alcoholics Anonymous.”

During the 1980s, Ms. McIlwaine settled in Toronto, befriending guitarist Jeff Healey. She performed with local musicians Terry Wilkins and Bucky Berger, embracing reggae music. For her next album, Looking for Trouble, she recruited and toured with bassist Kit Johnson, drummer Michelle Josef and percussionist Quammie Williams. Mr. Williams remembers her as a force of nature, always one with the music and comfortable in her own skin. “Ellen was an imposing figure,” he recalls. “She looked like a mother of 15 kids, but embraced being a woman, with eyelashes, makeup and long, painted fingernails, very frilly – even her amplifier had a lace covering she’d made. She absolutely slayed on the slide guitar. She was the real deal.” 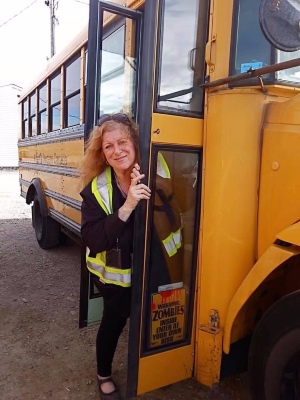 In the early 2000s, Ms. McIlwaine’s music was discovered by a new generation. Deejays sampled her work, including England’s Fatboy Slim and Japan’s Kenichi Yanai, with whom she toured Japanese dance clubs in 2002 and ’05. Meanwhile, young female artists from Suzie Vinnick and Jackie Venson to acclaimed guitarists Susan Tedeschi and Jennifer Batten have begun citing her as a major influence. Bebe Buckskin, a Nêhiyaw singer-songwriter from Northern Alberta, calls her simply “the original bad-ass mama.”

Ms. Toews says that her close friend will be remembered as much for her huge heart as her immense talent. “Ellen was someone who immediately related to people from other cultures,” Ms. Toews said. “She could talk to anyone, whether they were from Nigeria or Afghanistan – she was a bridge.” Added Ms. Toews (Ms. McIlwaine is godmother to her son, Max Austin, now a DJ in Nelson, B.C.): “Children loved Ellen and she loved them. She would have had 12 kids if she hadn’t chosen music and had the money.”

Holger Petersen, who released Ms. McIlwaine’s albums on his Stony Plain record label, spoke to her the week before she died. “She was so appreciative of the life she’d led,” Mr. Petersen said. “She was in a great place, really positive.”

With no surviving family, Ms. McIlwaine leaves behind a large circle of friends.

Originally published in The Globe and Mail 30 June 2021