My editor thinks Elvis Costello’s latest album, North, is a lot like Frank Sinatra’s 1954 classic In the Wee Small Hours. He’s right: both recordings are intimate explorations of emotional loss and the rush of new romance. On top of that, the string-backed piano ballads pack an immediate, visceral punch despite their spare instrumentation. When Costello calls, I mention the comparison. “That’s very flattering,” he says from the back of a limousine speeding along the Autobahn somewhere between Berlin and Hamburg. “Sinatra’s album is a masterpiece.” Then he brings up the Diana Krall factor: “People have made assumptions based on changes in my life that the appearance of quiet sounds, of orchestra and piano, has to do with my fiancé,” says Costello. “But I first heard Sinatra’s record when I was less than five years old. I can’t pretend as a child I understood it—I certainly didn’t understand the emotional territory of those songs. But I was familiar with the sound of them.”

Costello has every right to be defensive. He grew up in a household surrounded by the Sinatra, Peggy Lee, Ella Fitzgerald, Mel Tormé and bebop records of his bandleader father’s collection. And even before Krall appeared in his life, he had long demonstrated his taste for torchy piano ballads and lush, orchestrated accompaniment. Just think of his work with the Brodsky Quartet and Burt Bacharach. Still, if Krall isn’t the musical inspiration behind North, she’s certainly Costello’s lyrical muse. Songs like “Fallen,” “Let Me Tell You About Her,”

“When Green Eyes Turn Blue,” “I’m in the Mood Again” and “Can You Be True?” all bristle with the excitement of a new love. And the album’s title track (available only as an internet download) speaks playfully of heading to the land of maple leaves, “up where the polar bears and moose and geese will play/and some of them address you en français.”

But Costello admits that while there’s an inference of real life in the songs, they don’t exactly mirror his own life. “Real life is far more complex, messier and takes much longer than it takes to listen to 11 songs,” he says. “They’re not actually life recited. That would be far too tedious and too peculiar to my own experience to be comprehensible. There has to be some craft and distance in making them universal enough to be understood and responded to by other individuals who don’t need to know the details of my life in order to enjoy them.” Adds Costello: “Having said that, the transition that is described from a feeling of desolation after a great loss and sadness (the breakup of his marriage to former Pogue Cait O’Riordan) through a bewilderment and a failure to be able to recognize what’s happening to you and eventually surrendering to the idea of love and taking joy in that is something that I understand from experience.” Got that? 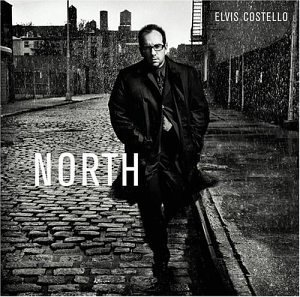 I decide to change my approach and ask Costello how he thinks his early fans will feel about the fact that North has only than 12 bars of electric guitar. “You have to accept that those people bought those records when they first came out, and many of them are approximately the same age as me,” he says. “Their experience of life might have led them to a place that they will very much understand this album and not by any means resent that it’s not My Aim is True, Part Two.” Added Costello: “There are also people who are young whose first record of mine might have been The Juliet Letters (with the Brodsky Quartet) or Painted from Memory (with Bacharach) for the very reason that it didn’t necessarily appeal to them when I was actually more abrasive than that. And maybe the lyrical qualities of those records were the very thing that drew them in.”

Certainly old and new fans will be drawn in to the lyrical qualities of North, if they give it half a chance. That, Costello admits, is the challenge. “We live in a time when emotion is often only recognized when it’s histrionic,” he says. “This music doesn’t raise its voice and isn’t accompanied by a backbeat. Obviously, I could have stepped the keys up, amplified the music and transformed the songs the way I’ve done on numerous other occasions. But the nature of these songs demanded a quieter tone.”

Before I let him go, I can’t help but ask if he’s really heading north, as the humorous title song suggests. “No, I’m not moving to Canada,” Costello tells me. “Obviously I’m spending a lot of time in Canada with Diana and it’s wonderful. I love visiting Vancouver and her house in Nanaimo. It’s a beautiful part of the world. There are parts of the country, like Nova Scotia and Newfoundland that I’ve never visited. And we made a pretty big impact when we first came to Toronto. So I’m always happy to be in Canada. But that’s as far as it goes.” So there you go.

Originally published in Inside Entertainment November 2003