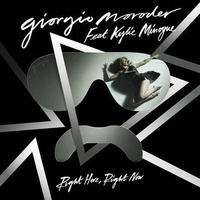 “Disco music is alive and well,” said Gloria Gaynor a few years ago. “It simply changed its name to dance music to protect the innocent.” The “I Will Survive” singer was right: the sound of the glitter-ball era never really went away—it just moved into gyms as workout music. Now disco is back. One of last year’s biggest albums was Daft Punk’s Random Access Memories, which featured contributions from disco legends Nile Rodgers and Giorgio Moroder. Rodgers, the front man of Chic, recently announced that his “Le Freak” group will release its first new album in more than 20 years this summer. Moroder, who produced such massive dance hits as Donna Summer’s “Love to Love You, Baby,” is also releasing his first album in decades, featuring contributions from Charli XCX, Sia, Britney Spears and others. Judging by this euphoric, synth-heavy track with Kylie Minogue, the 74-year-old godfather of disco, hasn’t lost his dancefloor touch.