On an unseasonably warm Thanksgiving, Gordon Lightfoot is in an uncharacteristically reflective mood, sipping coffee and looking back on a career that has produced every kind of song imaginable: historical epics, romantic ballads, sea shanties, country ditties, folk-style protests and bluesy “toe-tappers,” to use Lightfoot’s quaint term for his uptempo numbers. Many became hits; many more are considered iconic, as quintessentially Canadian as a Group of Seven painting or Alice Munro short story. To say that he’s been prolific is like saying the CN Tower looms over Toronto.

Sitting in the kitchen of his sprawling home in North York’s exclusive Bridle Path neighborhood, the 75-year-old legend admits that these days his focus is strictly on touring and spending time with his family (a life-threatening abdominal aneurysm in 2002 kept him out of action for two years). The songwriting well hasn’t run entirely dry – his girlfriend, Kim Hasse, recently encouraged him to complete one unfinished song, “It Doesn’t Really Matter.” There are three or four others “on the back burner,” he admits, but to pull them together at this late stage, well, he feels there just isn’t time.

“It was a great run while I was doing it,” Lightfoot says about his compositional output, which resulted in an astonishing 400 published songs (234 of which he’s recorded). “I was under contract for 33 years to record companies,” he says by way of explanation, adding “33 years” again for emphasis. “I had a band and a family, so I had a responsibility. When it was time to make the songs, I had to do that. Sometimes the pressure causes the job to get done, to keep things moving and make the next record.” 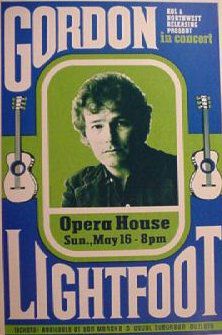 Uncommonly humble for a star of his magnitude, Lightfoot would much rather talk about his live show and rehearsing his band for the 65 to 80 North American dates he still proudly performs each year than his songwriting gifts. He’s more comfortable talking about his work ethic, good timing and good luck.

He never fails to credit Ian and Sylvia – who recorded two of his earliest songs, “Early Morning Rain” and “For Lovin’ Me,” and introduced him to their manager, Albert Grossman – with his good fortune as a composer. And he often admits that he had absolutely no idea that his masterpieces “If You Could Read My Mind” and “The Wreck of the Edmund Fitzgerald” would become hits.

But Lightfoot is undeniably gifted. The craft and beauty of his work, dating back to 1967’s “Canadian Railroad Trilogy” all the way up to 1998’s autobiographical classic “A Painter Passing Through,” has inspired artists from Elvis Presley and Barbara Streisand to Bob Dylan and Judy Collins. Canadian songwriters have often covered his work, most notably on the 2003 compilation Beautiful: A Tribute to Gordon Lightfoot, which included Bruce Cockburn, Murray McLauchlan, Ron Sexsmith, Blue Rodeo, Cowboy Junkies and the Tragically Hip.

The roots of his craft can be traced to the Westlake School of Modern Music in Los Angeles, where, at 18, the Orillia, Ont. native studied orchestration and musical theory. Returning to Canada with composition and sight-reading skills, Lightfoot launched his music career in Toronto – but took day jobs as a bank teller and a backup singer, dancer and drummer (under the pseudonym Charles Sullivan) to make ends meet.

Lightfoot’s first commercially recorded and released composition, “This is My Song,” appeared on 1962’s Two Tones at the Village Corner, a live duo recording made with his then singing partner Terry Whelan, a high school friend. But within months he’d released a single of another original song, “(Remember Me) I’m the One,” credited to simply Gord Lightfoot. A pre-folk, middle-of-the-road pop recording, it reached No. 3 on Toronto’s CHUM radio station chart. “We were aiming in a different direction at the time,” he recalls, “with more of a Pat Boone-ish, Jim Reeves kind of approach.” 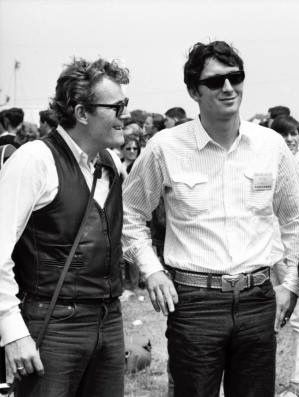 Inspired by Bob Dylan and Ian Tyson, Lightfoot soon switched gears and began writing the more poetic, folk-flavored material that made him famous. “Early Morning Rain” came about when he thought back to his poor, homesick student days in Los Angeles, watching big 707s taking off at the airport. The song’s chilling imagery, especially the line “You can’t jump a jet plane/Like you can a freight train,” marked a major shift in his writing.

Lightfoot drew from advice he received from Harold Moon, then head of BMI Canada, one of the forerunners of SOCAN, who told him that songs are a good marriage between lyric and melody. “Sometimes you just have to let the imagination do the work,” says Lightfoot, matter-of-factly. “You draw from an old scene, or something you experienced that has some kind of poetic drift to it, and put it into a lyric. And you try to do that in different ways with each song.”

Along with writing to deadlines brought on by recording contracts, Lightfoot has delivered some of his most memorable songs from commissions. “Steel Rail Blues” was one of several numbers he wrote for a Canadian National Railway film. When the CBC asked him to write a song about the building of the Canadian Pacific Railway, he researched the subject by reading a book by Sir William Cornelius Van Horne, the railroad’s chief engineer. The result was his now classic “Canadian Railroad Trilogy,” for which he wrote the slow middle part first and then wrote the start and end portions around it.

Through the 1960s, ’70s and ’80s, Hollywood came calling, as Lightfoot was contracted to write songs for movies. Neither “Too Much to Lose” (for the Paul Newman vehicle Cool Hand Luke) nor “Don Quixote” (for the Michael Douglas movie Hail, Hero) wound up in the soundtracks, although the latter did provide its composer with the title track for his best-selling 1972 album. His recording of Les Pouliot’s “My Love for You” did feature in the Bruce Dern western Harry Tracy: Dead or Alive, as did Lightfoot himself, in his acting debut as U.S. Marshal Morrie Nathan.

Curiously, although many of Lightfoot’s songs are closely associated with the Canadian landscape, with lyrics seemingly drawn from its lakes and forests, few have been written in those settings. His 10 marathon canoe trips across northern Canada, which he started making during the 1970s (he made his last one in 1986), have produced only a few geographically specific songs, including “Whispers of the North” and “Canary Yellow Canoe.”

He completed another, unrelated song, “Shadows,” (later the title track for his 1982 album), while on his eighth canoe trip, a 25-day journey that took him all the way up to Schefferville, in northern Quebec. But that was the exception. “When I was in the bush, the last thing I thought about was songwriting,” Lightfoot explains. “All I thought about was making 20 miles a day. You can’t take a guitar or anything. With all the rapids and big lakes to paddle through, it’s very challenging.” 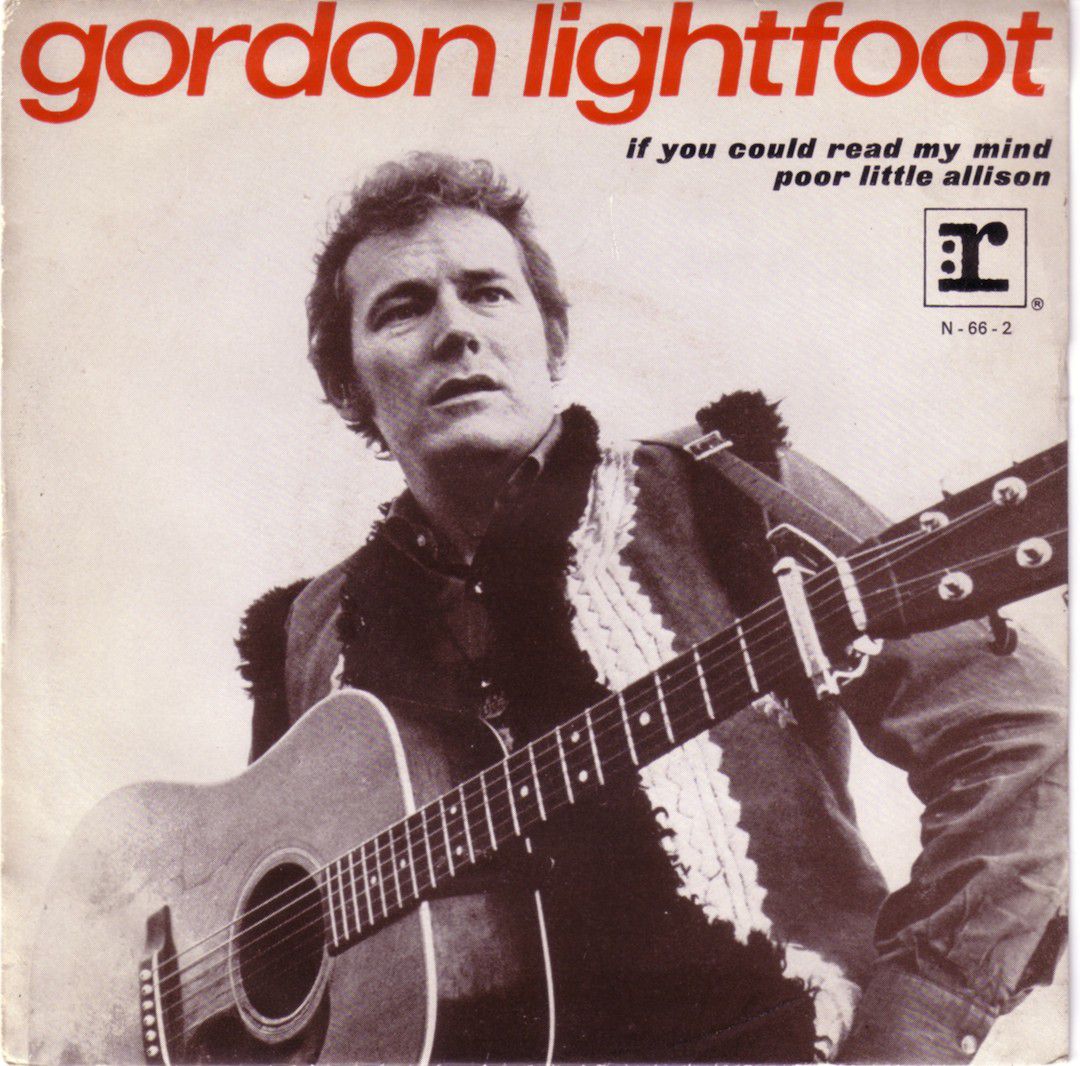 Yet to compose, Lightfoot requires total isolation – something he says has been hard on his marriages and family. One solution he found in the past was to write in empty houses, taking advantage of homes that real estate agents he knew were trying to sell. That’s how “If You Could Read My Mind” came about. “It was one of those fast ones,” he recalls. “It happened in an afternoon in an empty house. I had a desk and a chair, a pad of paper and my guitar. I just had to go for it.” Lightfoot wrote “Sundown,” his popular song about infidelity and jealousy, when he was alone in a farmhouse outside of Toronto and his girlfriend was partying at a city nightclub without him.

Lightfoot’s current home hasn’t produced many songs, but there are plenty of workspaces for him to rehearse with his band. Across a marble-tiled foyer from the kitchen is his office, filled with dark floor-to-ceiling bookcases that hold notebooks of every set he’s ever played. A stickler for detail, Lightfoot lists the date, venue and running times as well as tape recordings of all shows. A cassette player serves to record song ideas, while a yellow legal pad on a music stand contains lyrics, chords and annotations for various compositions. From his repertoire, he draws from 50 songs for his concert repertoire.

“We rotate them in our live show,” Lightfoot explains. “It’s like rotating pitchers in a baseball game. I have to keep changing it up to keep it fresh, but you can’t lose your standards either. The material we have now is perfect for the crowds we play to – that includes the ballads, all the ethereal stuff, plus the toe-tappers of course. Always keep the rhythm going, no matter what.”

He adds, “There’s a feeling that takes place [at concerts] that keeps me moving. It’s what makes me want to continue. As long as we stay organized and healthy, we can keep going.”

♦ The best advice I have to offer young people looking to break into music is for them to write their own material. The other thing is to just get out there and play.

♦ For songwriting, you need to have your own space. Even when my first wife and I just had a very small apartment, I had my own writing room where I locked myself in and did the work.

♦ It’s good when people can read their own story into the song you’ve written. I always hope my songs have a positive effect. You don’t want to negatively affect peoples’ emotional states.