Lightfoot, the Hawk and the Rolls-Royce By the mid-1960s, Gordon Lightfoot was spending more and more time drinking and hanging out with Ian Tyson and Ronnie Hawkins. Bar crawls on Yonge Street weren’t always possible, since the three would often be working. But Hawkins, who pretty much had the run of Le Coq d’Or, kept the place open and made sure the club’s go-go dancers stuck around so he and his buddies could trade songs and party with the girls long after closing. Lightfoot had even written a wistful lament about one of the dancers, “Go Go Round,” which became a hit record for him in early 1967 and was ultimately featured on his album The Way I Feel.

Friendship with Hawkins led Lightfoot to write another song. It all stemmed from the larger-than-life character’s taste for expensive cars and an outrageous but entirely true story. One day, the bearded, longhaired Hawkins walked into a Toronto car dealership on Bay Street, dressed in blue jeans and cowboy boots, and kicked the tires on a Rolls-Royce Silver Cloud. A salesman, looking on, was horrified. In a magazine article, writer Earl McRae recounted the exchange:

“How much?” asked Hawkins. “I doubt if you can afford it,” the salesman sniffed. “This RR on the front here, guess that stands for Rock ’n’ Roll, right?” The salesman nearly collapsed. “Is that dashboard real wood?” Hawkins asked. “Of course it’s real wood,” snapped the salesman. “Is there a termite warranty?” asked Hawkins.

Hawkins then asked if he could take the Silver Cloud for a test drive, but the salesman simply shook his head and started edging Hawkins toward the door. “I'd sure like this Rock ’n’ Roll car,” Hawkins told him. “I'll be back later.” McRae continued the story:

Hawkins went to Honest Ed’s discount store, got a shopping bag. Then he went to his bank, withdrew $18,500 cash. Then he went back to the dealership. The salesman turned white when he stomped in. “How much is this Rock ’n’ Roll car again?” he persisted. “Eighteen thousand, five hundred,” the salesman sighed wearily. “Fine,” said Hawkins, “I'll take ’er.” He dumped the bag of money on the floor. The salesman’s jaw dropped, his eyes popped. “Tell me,” said Hawkins to the sales manager, who had come running up at that point, “how much commission would your salesman normally get on this deal?” The sales manager swallowed hard. “About $1,500,” he said. “Good,” said Hawkins, “then I'll just take back $1,500.” He reached down, scooped it up and moments later drove the Rolls out of the showroom. 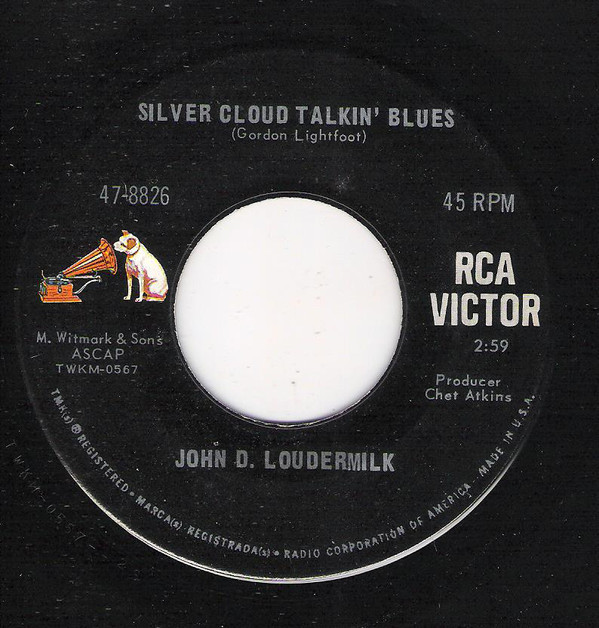 Lightfoot loved this Hawkins’ tale so much that he sat down and wrote “Silver Cloud Talkin’ Blues” about his buddy’s wild shopping spree. Although he never recorded the song, Lightfoot did allow the lyrics to be published in Canadian Motorist and even posed for photographs to accompany them in the magazine.

“Silver Cloud Talkin’ Blues” was recorded by John D. Loudermilk, the American artist most famous for writing “Tobacco Road” and “Indian Reservation,” hit songs for the Nashville Teens and Paul Revere & the Raiders respectively. Loudermilk’s recording of Lightfoot’s epic about Hawkins and the Rolls came out on the RCA label in 1966.