The beer was flowing freely as waitresses served platters of breaded shrimp, gourmet pizza and chicken wings. But it was not the regular hockey crowd at Gardoonie’s, a popular watering hole opposite Toronto’s Maple Leaf Gardens. Instead, more than 300 people were gathered there last week to pay tribute to a rock ‘n’ roll legend.

Standing amid the hockey memorabilia on the walls, Ronnie Hawkins was beaming as he surveyed the crowd. Officially, the lavish party was being held to launch Let it Rock!, his 26th album and the accompanying video that captures his recent 60th birthday concert at Toronto’s Massey Hall, featuring such rock luminaries as Jerry Lee Lewis, Carl Perkins and The Band. But Hawkins, who has seen his star rise and fall many times in his 40-year career, never takes life too seriously. Even the promise of a lucrative breakthrough with this album prompted typical Hawkins humor. “What we gonna do with all this money?” he asked in his trademark Arkansas drawl. “We used to have income problems. Now, we’re gonna have income tax problems.” 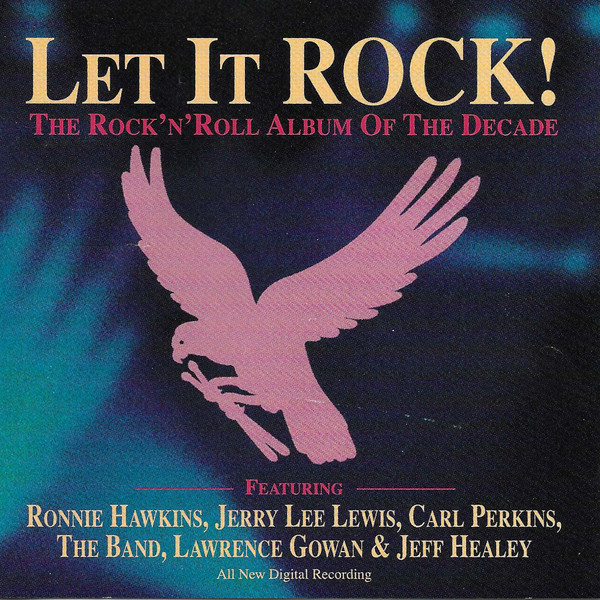 Fact is, the Hawk could use a little extra dough. Although once a millionaire, with mansions and Rolls-Royces to spare, the rockabilly pioneer has fallen on hard times—a result, he claims, of luckless business ventures. And his health, after four decades of playing bars and leading a sometimes reckless lifestyle, is not the best. Now a more restrained performer, he has dropped the famous “Rompin’” part of his billing. But Let it Rock! has the potential to finally provide Hawkins, who has lived in Canada since 1958, with the kind of lasting fame and fortune that have so far eluded him. The album and video feature classic hits: Lewis’ “Great Balls of Fire,” Perkins’ “Blue Suede Shoes,” The Band’s “The Weight” and Hawkins’ own “Mary Lou.” There also are contributions from Canadians Lawrence Gowan and Jeff Healey—in all, an impressive collection of old-style rock ’n’ roll. And Quality Music & Video, the Toronto-based company behind the product, is mounting an intensive marketing campaign.

Sitting in a hotel bar the day before the launch party, Hawkins, who lives on 198 acres beside Stoney Lake, north of Peterborough, Ont., reflected on the birthday concert that seems to have breathed new life into his career. “I’m glad we got it down,” he said, between sips of rum and Coke. Pointing to a picture of himself with Lewis and Perkins—he performed with both of them in the 1950s—Hawkins added: “What you’ve got there are three endangered species. The Grim Reaper has missed us each about 10 times.” Then, lighting a cigarette, he said that the timing of the project seems right. “Forty years have gone by and Nashville is only just now playing ‘50s rock ‘n’ roll,” he observed. “They’re calling it hot country or somesuch, but it’s just like what we were playing back in 1952.”

Since landing in Canada, Hawkins has played the role of Professor Rock, with his group, the Hawks, serving as Rock ’n’ Roll High School. The Band members—fellow Arkansan Levon Helm and Canadians Robbie Robertson, Rick Danko, Garth Hudson and the late Richard Manuel—are his most famous Hawks graduates. But Hawkins has seen many other fine musicians pass through his class: guitarists Roy Buchanan, Duane 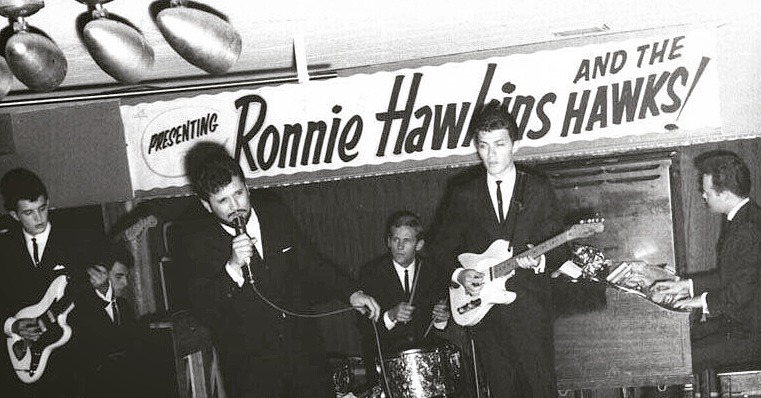 Allman and Domenic Troiano, singers Bobby Curtola and Beverly D’Angelo, now a Hollywood actress, and piano players David Foster and Lawrence Gowan. Gowan sang Little Richard songs for the Hawks during a six-month stint in 1984. Recalls the Toronto-based singer-pianist, now a successful solo artist: “It was a total thrill to play back then with Ronnie. I didn’t grow up with ’50s music, but I sure got a quick education.”

Hawkins’ influential role in rock music, not to mention his storytelling abilities, have also attracted some illustrious houseguests over the years, including Kris Kristofferson and Elvis Costello. John Lennon and Yoko Ono stayed at Hawkins’ Toronto-area home when they visited Canada in 1969 to launch their ill-fated Peace Festival. The ex-Beatle never paid a $15,000 bill he ran up on Hawkins’ telephone, but he did help promote Hawkins’ 1970 single “Down in the Alley.” In 1974, Hawkins played host to Dylan, who has called the rock veteran one of his idols. Says Hawkins: “He used to follow me around with this little book, writing down things I’d say—naughty one-liners and stuff. But he’s mysterious. Just a few years ago, he showed up at one of my concerts in disguise, with weird orange hair.”

These days, the musician can be found at his Stoney Lake estate, dubbed “Mortgage Manor North,” driving not a Rolls-Royce but a John Deere tractor. He lives there with his wife of 34 years, Wanda, and two of their three children. Leah, a 25-year-old singer, and Robin, a 30-year-old guitarist with children of his own, have been members of the Hawks at various times, but are now pursuing independent music careers. “They don’t want their dad representing them,” Hawkins says ruefully. “Whatever I tell them, they do the opposite.” The elder son, Ron Jr., 33, showed signs of being the most talented, Hawkins claims, a guitarist who could have “eaten Robbie Robertson alive,” but his career has been sidetracked by schizophrenia.

Despite his personal and professional setbacks, the Hawk remains hopeful about his latest chances for success. “In the past, every time we’d get something going,” he said, “something else would come along to screw it up. Maybe our karma’s good this time. Anyway, we’re ready to rock.”

Originally published in Maclean's 15 May 1995