For Joni Mitchell, fame has been a fickle lover. In the 1970s, it lavished her with sold-out tours and numerous magazine covers. She was the poetic, soul-baring artist from Canada who had taken up residence in the hills of California, becoming rock's lady of the canyon. But before the decade was over, Mitchell also felt the sting of rejection. Her jazzier, more abstract albums left many critics mystified. With little or no radio airplay, they sold poorly. Mitchell responded by abandoning the tour circuit. And, despite her three strong albums in the 1980s, her work was still being unfavorably compared with her early successes. "The pop arena is a harsh world, really," says Mitchell. "It moves you up and down arbitrarily, regardless of the quality of your work."

But now, Mitchell is back in the spotlight. In August, she made a triumphant return to the folk-festival stage, headlining the annual Edmonton event--her first such engagement in almost 30 years. Then, last month, the former recluse shocked observers by appearing on MuchMusic's Intimate & Interactive, a TV special in which she performed a mix of old and new material and fielded questions from fans. Now, with the release of her 17th album, Turbulent Indigo, Mitchell appears to be once again getting her due from the music industry. Billboard editor-in-chief Timothy White compared the new album with Blue, Mitchell's beloved 1971 classic, citing the current work's "brave blend of romantic faith and fervid realism." Meanwhile, a recent Rolling Stone feature on women in rock called her a major influence and a "musical genius."

In a recent interview with Maclean's, Mitchell, 50, appeared modest about such tributes. Sipping cranberry juice and chain-smoking, she seemed cheerful and relaxed as she ruminated on her career and her native country. Before the interview she insisted that she would not answer questions about her private life. Yet, while talking about songs from her new album, co-produced with her bassist-husband, Larry Klein, Mitchell revealed much about herself. In particular, she spoke of how experiences she had in British Columbia recently became a powerful theme on her new album. "I kept meeting battered women," said Mitchell, who spends up to half of each year on her 40-acre property north of Vancouver. "They'd introduce themselves to me and want to talk about it." Those encounters led to the moving ballad "Not to Blame." Another powerful song, "The Magdelaine Laundries," was inspired by an article about a brutal Irish nunnery that she read in a Vancouver newspaper. Said Mitchell: "It isn't that I set out to suddenly become a feminist, but the things that upset me the most, or that stimulated thought, all seemed to be atrocities against women. The album is really symptomatic of the times." 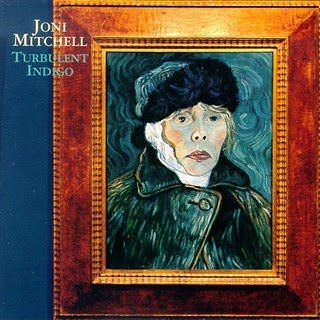 Like such mid-1980s albums as Dog Eat Dog, Turbulent Indigo tackles injustice and social ills with poetic vengeance. But the tone is often muted, with stark, acoustic accompaniment. "Sex Kills," written in the aftermath of the Los Angeles riots, details a bleak world full of greedy lawyers, gun-toting schoolchildren and sexually obsessed advertising. The title track denounces a government-funded, assembly-line approach to fostering artists. Based on Mitchell's experience speaking at a conference on the arts in her home town of Saskatoon, the song features the damning lines: "You wanna make Van Goghs/Raise 'em up like sheep." And "Borderline," which decries national and other boundaries, seems aimed partly at those who have criticized Mitchell for being an expatriate: "You snipe so steady/You snub so snide."

While she expresses a deep fondness for Canada, Mitchell still bristles at how the country has treated her. "In the beginning, people here didn't recognize that I was good," she said during the MuchMusic special. "As soon as I crossed the border, they thought I was great. And then they thought I got too big for my britches and wanted to put a lid on me." Mitchell also resents the folksinger label, which, she says, persists in Canada. "It shows such a lack of knowledge about my music, which is tinged with jazz and so many other styles. Leonard [Cohen] is known as a poet and a writer. And Jane Siberry gets referred to as a pop singer-songwriter. But they're still calling me a folksinger."

Siberry is one of a number of artists, including Prince and Tori Amos, who have cited Mitchell as a major influence. In the Rolling Stone article about women rockers, Chrissie Hynde of The Pretenders contends that Mitchell's guitar playing is vastly underrated. "I don't know any guitar players, any of the real greats, who don't rate Joni Mitchell up there with the best of them," she says.

Hynde goes on to bemoan the fact that Mitchell rarely does concerts. "We want you, Joni," Hynde says. "Put down your paintbrush for five minutes, please." While painting remains a constant occupation (the artwork for her latest album features reproductions of several new paintings), it is not what has kept Mitchell from touring. "It's my health," she said bluntly. Throat problems and, especially, the adult repercussions of childhood polio--which nearly killed her at the age of 9--have forced her to cut back on activities. "I have to guard my energy very jealously," she said, "and touring, of course, is very stressful." Still, with a landmark album and renewed interest in her music from young and old alike, Mitchell admits to being tempted. "I played Edmonton like a coffeehouse, talking to people in the first few rows, and it felt great," she recalled. "And MuchMusic was like that. So maybe, if it was small scale, that's the way to do it." Having survived the fickleness of the pop-music world, Mitchell is back. And fame seems to be a more committed lover this time around.