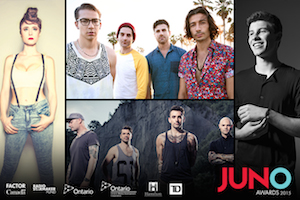 Canadian music’s big night takes place this year in Hamilton, Ont., airing on CTV Mar. 15th. It’s the first time since 2001 that the city southwest of Toronto—affectionately known as the Hammer—has hosted the awards and it’s pulling out all the stops for the occasion. The Juno show always makes for great entertainment and this year’s, the 44th edition of the awards, promises to no exception.

This year’s show offers live music from the likes of Magic!, Kiesza, Hedley and the Hammer’s own Arkells. One of the night’s most anticipated performances will be from the Weeknd (aka 25-year-old Abel Tesfaye), who takes to the stage to deliver his hit single “Earned It” from the Fifty Shades of Grey soundtrack. Does the alternative R&B falsetto singer deserve to be a main attraction? With international acclaim and comparisons to Michael Jackson, yeah, he’s earned it.

Jacob Hoggard is renowned for his high energy. The dynamic singer will need every bit of it to pull off double duty as host and performer with his pop-rock band Hedley. He may also be returning to the podium during the evening if his group wins any hardware. Fortunately, the former Canadian Idol contestant has a flair for spontaneous humor, which will come in handy. When asked where he gets his trademark intensity, Jacob quipped: “All I eat is broccoli.”

With the induction of Alanis Morissette, the Canadian Music Hall of Fame gets a diva with a difference. Alanis first made her mark when she channeled her anger about a callous lover into “You Oughta Know,” which became one of the biggest alt-rock hits of the ’90s. The Ottawa native has since evolved into a consciousness-raising role model, with music reflecting her spiritual quests and self-help journeys. Her performance on the show promises to be this year’s emotional highlight.

There are bound to be upsets in some of the major categories, which are also among the most difficult-to-predict contests. Artist of the Year, which pits veterans like octogenarian Leonard Cohen against relative newcomers Deadmau5 and the Weeknd, is anyone’s guess. And Single of the Year features an impossibly close race between three frontrunners: Magic!’s “Rude,” Kiesza’s “Hideaway” and Drake’s “Hold On, We’re Going Home.” Who’s going home empty handed?

Although this year’s show features a good number of household names, there are plenty of young, up-and-coming artists well worth discovering. From anthemic indie rockers Alvvays (pronounced Always) and Björk-approved Inuit throat singer-songwriter Tanya Tagaq to dance breakout sensation Kiesza and reggae-infused pop outfit Magic!, which leads the night with five nominations, these artists offer a wide array of fresh new sounds for our playlists. And remember: Bryan Adams, Sarah McLachlan and Nickelback were once all Juno newcomers themselves.