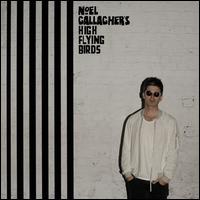 Oasis remains one of England’s best-ever bands. Sadly, it couldn’t survive the fractious relationship of the battling Gallagher brothers. Rivalry with Liam Gallagher’s post-Oasis group, Beady Eye, did inspire Noel to record a strong solo debut in 2011. But now the 47-year-old Gallagher has outdone himself. “Lock All the Doors” has an urgent euphoria that recalls Oasis’ “Morning Glory,” while the dreamy “Riverman” is Noel at his Beatles-influenced best. There are also nods to Led Zeppelin here and there. But the album is more than a tribute to Gallagher’s rock heroes. “In the Heat of the Moment” and “Ballad of the Mighty I,” the latter with former Smiths guitarist Johnny Marr, feature all the hallmarks of Gallagher’s finest songs: surging grooves and highly addictive sing-along choruses.