A lot can change in four years—especially in the music world. In 2008, when Kathleen Edwards released her album Asking for Flowers, the Ottawa native was known primarily for story songs about other characters, some drawn from real-life headlines, and an alt-country sound she shaped with her husband, guitarist Colin Cripps.

Fast forward to 2012: Edwards has a brave new album, Voyageur, made up almost entirely of first-person narratives and an engaging sound steeped in multi-textured pop that owes a good deal to its U.S. producer, Justin Vernon, also known as ethereal electronic folk star Bon Iver, who just happens to be her new boyfriend.

Sitting on a park bench overlooking the Toronto skyline on a blustery fall morning, the flame-haired songwriter laughed as she reflected on the seemingly sudden shifts in her life. “I remember doing an interview when my last record came out,” says Edwards, “and I was saying that I’m married and really happy and don’t have any roller-coaster emotional experiences to draw from. Well those are back on!”

Voyageur charts the trauma and transformation of marital discord, personal reflection and new romance. Edwards’ relationship with Cripps, a former member of Crash Vegas and Junkhouse, dated back to when he produced her album Back to Me, which earned Edwards Juno nominations for Songwriter and Adult Alternative Album of the Year. Settling in Cripps’ native Hamilton, the couple lived and breathed music, with Cripps touring as her guitarist. But all was not well on the home front.

“You don’t talk to me, not the way that you used to,” Edwards sings on “House Full of Empty Rooms. “Maybe I don’t listen, in a way that makes you think I do.” Along with “Change the Sheets,” it’s one of Voyageur’s most starkly autobiographical numbers. “I wrote those songs when Colin and I were still together,” Edwards admits. “I didn’t realize at the time how my subconscious was bubbling out of my mouth. I was processing my emotional experiences through songs.”

As Edwards’ life was changing, so too was her desire for a new sound. “My music wasn’t reflecting all the colors of my personality as well as it should,” she noted. “I’d done the roots-rock, Americana thing and it wasn’t interesting anymore. I feel more an affinity for artists like Feist and Tallest Man on Earth (Swedish singer-songwriter Kristian Matsson), who sounds like Dylan but plays to young audiences. I wondered why I never played to that crowd.”

Seeking a new muse, Edwards ventured to Seattle and began working with John Roderick, of indie rockers The Long Winters. Together, they co-wrote the melancholic piano ballad “Pink Champagne” and “A Soft Place to Land,” a duet between Edwards and Bon Iver. But it’s the sexy “Mint,” with its rugged electric guitar, and the joyful “Sidecar,” a power-pop number co-written with longtime collaborator and bandmate Jim Bryson, that best showcase a feisty change in direction. 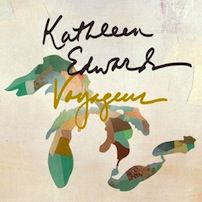 The connection with Bon Iver came about when Edwards travelled to Vernon’s Wisconsin home studio to record a version of “Wapusk,” a song she originally wrote and recorded without Vernon for National Parks Project, a multi-artist CD celebrating Parks Canada’s centennial that includes tracks by Sam Roberts, The Weakerthans’ John Samson, Shad and Sarah Harmer, with whom Edwards shares management. The chemistry was immediate and the pair continued working on songs for Voyageur. As a producer, Vernon, a professed Edwards fan, had a liberating effect on the artist. “He influenced me by not being precious about anything,” she says. “It was so easy for him to throw up a mike on a guitar amp, pick up an instrument and try anything. I’d always been more structured before, so it really freed me up.”

Vernon’s experimental approach paid off with dreamy soundscapes like “Going to Hell,” with its climatic guitar solo, and “For the Record,” a moody epic in which Edwards and Norah Jones share vocals. “Justin would just mess around with sounds,” she recalls. “Sometimes it was super fuzzy, crazy stuff and I was like, ‘Cool, I’m just going to let him do his thing.’ He challenged me without betraying who I am.”

For fans of Edwards’ story songs like the police dramas “In State” and “Six O’Clock News” or the real-life murder ballad “Alicia Ross,” Voyageur’s personal narrative may come as a bit of a surprise. “I’ve always written about things that struck a chord with me,” she explains. “It’s not like they’re impersonal, but I feel a little less connected to those songs now because they’re about someone else. This time around, I just had a lot of my own stories to tell.”

As for the new album title, Edwards says it resonates for her on multiple levels. “The album was a journey about change and one of the hardest things I’ve ever done,” she says. “As a teenager, I spent a lot of time canoe-tripping and on my last long trip, from Yellowknife to the Arctic Circle, our camp group was known as Voyageurs. So I realized that’s totally my life: I was a voyageur then and I’m a voyageur now. Plus,” she adds with a grin, “it has a nice Canadian ring to it.”