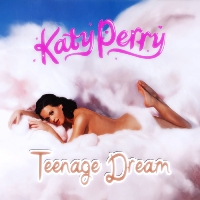 It’s proving to be another Katy Perry kind of summer. Just like 2008, when her spunky ode to bi-curiosity “I Kissed a Girl” filled the airwaves, this summer’s most ubiquitous tune is Katy’s “California Gurls.” A breezy West Coast anthem, it’s a sun-kissed jam about Daisy Dukes and girls “so hot [they’ll] melt your Popsicle.” The song and its video, a frothy fantasy with cotton candy clouds and cupcake bikini tops, go down as easily as cold soda.

One of pop’s hottest stars, Katy didn’t always sing about sex on the beach and locking lips with girls. Born in Santa Barbara to Christian pastors, she was once a gospel-rock singer who bounced around between record labels before re-branding herself as a playfully sexy pop singer and scoring a massive hit with her One of the Boys album. Now 25 and engaged to British comedian Russell Brand, the always colorful Katy is set to trump that success with Teenage Dream.

The new album, more beat-driven than its predecessor, still has plenty of fun, guilty-pleasure songs like “California Gurls” and the bouncy title track, about first love. Naughty tracks include the girls-gone-wild “Last Friday Night (TGIF)” and the sexual innuendo of “Peacock.” But Teenage Dream also features darker moments like the angry “Circle the Drain,” about the drug addiction of her former boyfriend, rock singer Travis McCoy, and the cautionary “Who Am I Living For,” about the pitfalls of stardom. While she’s everybody’s favorite California party girl, Katy is also growing up.