By the end of the 1960s, the psychedelic-rock revolution was peaking. Dream-laced lyrics and trippy effects, including distortion, tape-loops, echoes, delays and phase shifting, were rampant. Adventurous musicians were busy employing a new array of instruments to conjure up kaleidoscopic sounds. The Beatles, leaders in the new music, had already introduced the sitar on Sgt. Pepper’s and the Mellotron on “Strawberry Fields Forever.” The year 1969 saw numerous bands tripping out with delightfully freaky albums, including Skip Spence’s Oar, Jefferson Airplane’s Volunteers and The Moody Blues’ On the Threshold of a Dream.

During the winter of ’68, the members of Toronto’s Kensington Market were dreaming up their next psych-rock move. The band had already garnered praise for its debut album, Avenue Road, both at home and in America and Japan, where a picture sleeve of “I Would Be the One” had been issued. And several of its songs featured sitar. But now the group was looking to expand its horizons with new songs by singer-guitarists Keith McKie and Luke Gibson and guitarist-keyboardist Gene Martynec. Help would come from a close encounter with a Moog Synthesizer, a futuristic piece of equipment that had made its debut appearance that year on a classical album called Switched-On Bach, by electronic composer Wendy Carlos.

The Market’s members were introduced to the land of Moog and its strange and wondrous sounds by their road manager, Bart Schoales, who was an enthusiastic fan of Intersystems. An experimental, mixed-media Toronto group, Intersystems was comprised of sculptor Michael Hayden, architect Dick Zander, poet Blake Parker and musician John Mills-Cockell, whose instrument of choice was the Moog. Excited by the prospect of adding a synthesizer to its next album, the Market—including bassist Alex Darou and drummer Jimmy Watson—invited Mills-Cockell to join them in the studio. The marriage of the Moog’s alien sounds with the group’s latest songs would prove to be a freakishly fruitful partnership.

Avenue Road had been recorded in New York’s Century Studio, which suited producer Felix Pappalardi at the time. The New York-based Pappalardi had just finished recording Cream’s best-selling Disraeli Gears and had quickly become one of America’s hottest producers. But for the Market’s next album, Pappalardi liked the idea of setting up shop at Toronto’s Eastern Sound studio, right in the heart of the Yorkville hippie district. “For Felix, it was a real adventure,” recalls Bernie Finkelstein, the Market’s manager. “Everyone in the band was living around the village, just a few hundred yards from the studio. And we could record a little, walk down the street, drop in at a coffee house, have a drink, talk to friends and just hang out. Felix loved the whole neighborhood vibe of it.”

Sessions for the new album at Eastern began in earnest. All three of the Market’s principal songwriters brought forward strong new material. McKie had several fully formed songs, including “Is It Love,” “Think About the Times” and “Half Closed Eyes,” a Renaissance-style ballad with imagistic lyrics about a winter’s day. McKie, Martynec and Gibson all co-wrote songs, either with each other or with Pappalardi, who was bringing his skills as an arranger and multi-instrumentalist to the sessions. And even Finkelstein got in on the act, co-writing the technicolor feel-good number “Cartoon” with Martynec. Experimentalism—not to mention the group’s hallucinogenic diet—fuelled everything. “It may sound arrogant today,” says Martynec, “but at the time we felt we were pursuing art rather than trying to fixate on making hits. The music world was a bit more experimental then and you really could try new things.”

A distinctive Sgt. Pepper influence showed up on several tracks, including the psychedelically-enhanced “Side I Am.” For the song, an epiphany about a stoned-out chess game, Pappalardi added some distinctly Pepper–ish trumpets to Martynec’s piercing guitar and the mellifluous harmonies of Gibson and McKie. Martynec, meanwhile, created a medieval mood on “If It is Love,” by conjuring up a harpsichord-like sound on his keyboard. And “Said I Could Be Happy,” with its skipping, ¾ beat, is a gentle daytime reverie with Beatle-esque lyrics: “She’s all free fall lately on the moon,” sings McKie, “Sunshine on my mind above the afternoon.” 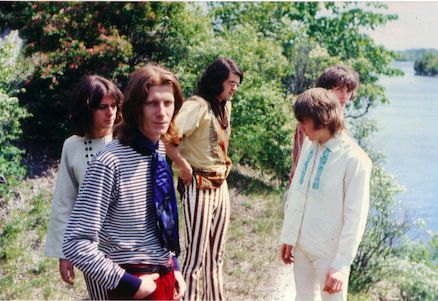 The recording sessions took their most adventurous turns on tracks featuring the Moog. Mills-Cockell extracted a slow, unearthly groan from the instrument to compliment Gibson’s plaintive cry on “Help Me.” The oscillating synthesizer creates an almost vertigo-inducing thrum on the track, as Gibson sings about climbing and slipping and needing a helping hand. And it added a haunting swirl of sound on “Half Closed Eyes.” Some of its most other-worldly sounds showed up on “Cartoon,” where Mills-Cockell crafted a mind-boggling assortment of spacey effects.

Having the analog Moog in Eastern Sound Studios was like having a proverbial elephant in the room. “It’s not like today, where equipment is digitized and small and you just have to push a button and there’s sound automatically,” explains McKie. “The Moog was this huge monstrosity, with large, modular components and all kinds of plug-ins. It looked like one of those old telephone switchboards. And John would plug in various jacks and eventually he’d draw out the most extraordinary sounds.” Added McKie: “Sometimes the sounds were absolutely gorgeous and almost impossible to describe—like angels dancing on a skating rink.” 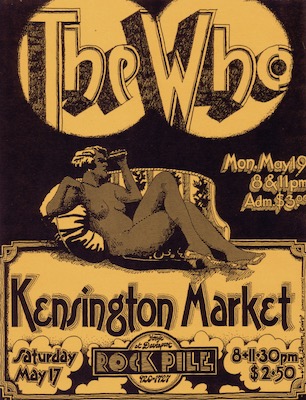 Mills-Cockell’s $18,000 Moog made its historic live debut on March 22, 1969 at Toronto’s Rockpile, where the Market premiered the newly recorded songs from its forthcoming album, Aardvark. Opening for the band was Leather, a Yorkville group that featured the Market’s roadie Schoales. More than 900 people gathered in the former Masonic Temple to hear the Market perform both familiar songs and its latest material. Unfortunately, the sound mixing at the Rockpile failed to capture the Market’s thrilling new sound with the Moog. “Much of its effect was lost in poor sound balance,” wrote Globe and Mail reviewer Ritchie Yorke, who noted that some people in the audience, baffled by the new electronics, left before the concert ended.

The Market had greater success when it returned to the Rockpile two months later, in May, to coincide with Aardvark’s release. Appearing with Edward Bear in between dates by supergroup Rhinoceros and just two days before The Who made its Rockpile debut, the Market thrilled its audience with a triumphant showcase. The band played the Rockpile once more that month, appearing with Grand Funk Railroad, along with Milkwood and Leather. Then, in June, the Market performed before the largest audience of its career in June at the city’s Varsity Stadium, in front of over 50,000 people at the Toronto Pop Festival, joining a lineup that included Steppenwolf, The Band, The Byrds, Tiny Tim and Blood Sweat & Tears.

All of these appearances with the band’s secret weapon, Mills-Cockell’s dazzling Moog, helped to promote the group’s daring new album, which featured the avant-garde work of celebrated graphic artist Bruce Meek. Why did the band choose to call it Aardvark? “We liked the fact that the word was high up in the alphabet,” chuckles Martynec.  “Avenue Road got listed near the top of the Warner Bros. catalogue. We thought with Aardvark it’d be right at the pinnacle.” 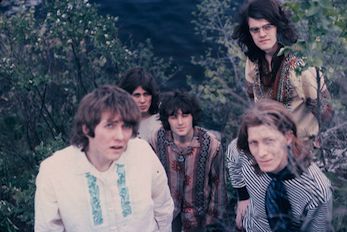 Ultimately, the Market’s heavy use of hallucinogens, LSD and MDA in particular, took its toll. Another attempted tour of the U.S. ballrooms proved a disaster. “It’s all a bit of a blur now,” admits Gibson. “Everyone was pretty stoned in those days and we didn’t live anywhere. We were just in hotels and on airplanes constantly, so that was hard. But, mostly, people were just doing a lot of drugs and that causes a lot of confusion.” Finkelstein agrees. “I think the drug culture got the best of the band,” he says, “and it got the best of me to some degree as well.” Within a year of Aardvark’s release, the band was disintegrating.

Finkelstein and Gibson left Yorkville and moved out to the country to live on a commune in Killaloe, Ont., 200 kilometers north of Toronto. McKie carried on performing as a solo artist. Martynec, who’d been inspired by Pappalardi’s musicianship and studio skills, set his sights on production work. Watson and Darou disappeared from the music scene altogether, with the former going AWOL while the latter met a tragic end. Darou retreated to his Yorkville crash pad, plunged into an apparent deep depression and never came out. He was later found dead of starvation.

The Killaloe dropouts eventually returned to Toronto. Finkelstein formed True North Records and launched the recording careers of Bruce Cockburn, Murray McLauchlan and Gibson, who reunited his band Luke & the Apostles briefly, before releasing a fine solo album, 1972’s Another Perfect Day. Martynec went on to become one of Canada’s most successful record producers, working on albums by Cockburn, McLauchlan and others. Mills-Cockell formed the electronic rock band Syrinx and released two groundbreaking records on True North and scored a cult hit with “Here Come the Seventies.” Schoales, meanwhile, became an award-winning designer of True North album covers.

Kensington Market made its mark as Canada’s quintessential psych-rock group, a band of hippie musicians from Yorkville with lysergic dreams of greatness. Born during the Summer of Love in 1967, the Market released two classic albums before dissolving as the Sixties gave way to the Seventies. Aardvark, one of the first rock recordings to embrace the sonic possibilities of the Moog, is the sound of a band venturing deep into pop music’s outer limits. It’s a significant legacy to have left behind: an album that takes the listener on a journey to the far-off corners of the mind, a place as wild and wonderful as any fantasy novel or Fellini film. So sit back, slip on the headphones and roll ’em if you got ’em. The Aardvark adventure is about to begin.

Released in 2008 by Pacemaker Entertainment. With thanks to Keith McKie, Luke Gibson, Eugene Martynec and Bernie Finkelstein for interviews and Bart Schoales for the visuals.