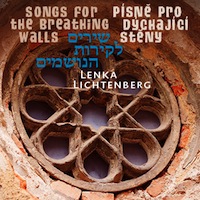 Passionate and prolific, Lenka Lichtenberg is a force of nature within Canada’s world music scene. Born in Prague of East European heritage, she is a composer, vocalist, producer, ethnomusicologist and bandleader with five solo CDs and several collaborative projects to her credit. Although she works in six languages, Lichtenberg has made Yiddish her main medium out of a deep belief in keeping that tradition alive (her mother is a Holocaust child survivor). She has recorded what she calls “Yiddish ethno-jazz” with members of Tasa, and partnered with oud and violin virtuoso Yair Dalal in a unique Yiddish-Iraqi work-in-progress. Now Lichtenberg has released two boundary-pushing CDs. Bridges, recorded live at Toronto’s Lula Lounge, pairs her with Middle Eastern musician-dancer Roula Said in a Yiddish-Arabic musical dialogue. Backed by superb musicians like Ravi Naimpally, Ernie Tollar, John Gzowski and Alan Hetherington, Lichtenberg and Said trade vocals on songs like Nujum and Open My Eyes. Although the English lyrics are sometimes a little too on the nose, the music is often thrilling and the album’s cross-cultural message, best expressed in the opener Peace is the Only Way, admirable. Lichtenberg’s Songs for the Breathing Walls took her into 12 Czech and Moravian synagogues where she recorded songs based on biblical texts once recited and chanted within those walls. Set to ouds, sitars, clarinets and violins, the Jewish liturgical poems and prayers take on a powerful, haunting quality. Like Loreena McKennitt with Celtic sounds, Lichtenberg is pushing Yiddish music beyond its klezmer stereotype into a truly inspired form of world music.