Feature Article: The Sadies and the Good stuff Dallas and Travis Good have worked with Neil Young, author Margaret Atwood, Randy Bachman, Buffy Sainte-Marie and actor Gordon Pinsent. But it was another Canadian icon—one with whom they’ve yet to collaborate—who offered some crucial wisdom.

It was 1996, when their band the Sadies was getting started, and Dallas’ and Travis’ father, Bruce, of bluegrass heroes the Good Brothers, was celebrating his 50th birthday at Toronto’s Horseshoe Tavern. Into the club walks Gordon Lightfoot, who’d had the senior Goods open for him during the 1970s. “Afterwards,” Travis recalls, “Lightfoot turned to us and says, ‘The only advice I’ll give you is do your own songs.’ We took heed and started getting rid of all those traditional bluegrass murder ballads and tried to write our own.”

At first, the Sadies made their mark with Dallas and Travis as formidable guitar slingers, backed by their rhythmic accomplices of upright bassist Sean Dean and drummer Mike Belitsky. Mostly, they were a killer instrumental band, reveling in their love of surf songs and spaghetti western music. Although the group also embraced 1960s psychedelic and garage rock sounds, the brothers never entirely strayed from the country roots of their Good family upbringing.

The Sadies members honed their chops touring, either on their own or opening for Blue Rodeo and the Tragically Hip. They also became Neko Case’s backing band and recorded with such diverse artists as Jon Langford, John Doe, Andre Williams and Roger Knox—all influential collaborations.

But it was Gary Louris, of U.S. country-rockers the Jayhawks, who had the greatest impact on their compositional skills. Louris produced the Sadies last two studio albums, 2007’s critically acclaimed New Seasons and 2010’s Polaris Prize-nominated Darker Circles.

“I can’t stress enough how much Gary changed my approach to songwriting,” says Dallas, “even with simple rules like ‘don’t overuse certain words.’ He really gave me confidence as a lyricist.” Adds Travis: “We’re pretty confident with guitars, but not with words and singing. Gary’s great for that and suggested harmonies that my brain just doesn’t pick up on.”

Louris has also produced the Sadies’ next studio album, due out in the late summer of what promises to be an especially busy year—even for one of Canada’s hardest-working bands. Following that untitled recording will be a rock album with the Hip’s Gord Downie. 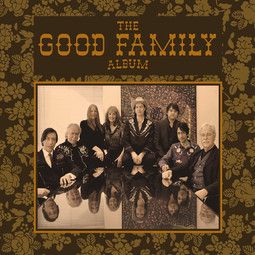 Already out is The Good Family Album, a bluegrass affair that brings Dallas and Travis together with their father Bruce, uncle Larry, mother Margaret and cousin D’arcy Good, all backed by the Sadies’ Dean and Belitsky. The album features eight songs written by the family and two written with Keelor.

Dallas, who co-wrote “Life Passes (And Old Fires Die)” with Daniel Romano and another pair with D’arcy, says that recording covers like “Will the Circle Be Unbroken” was never an option. “That would be old hat and far too predictable,” says Dallas, who also co-wrote “Restless River,” with Bruce about his dad’s First Nations stepmother. Adds Dallas: “Writing with D’arcy was great, because I’ve always considered her the most talented member of the family.”

A Goods project brings things full circle for Dallas and Travis. Both were born in the bluegrass world of their father and uncles, while Travis joined the Good Brothers band after high school. “It wasn’t like we grew up Partridge Family style at all,” Dallas recalls, “but we were surrounded by good records and lots of instruments. I initially rejected bluegrass for punk—until I found out that bluegrass is a lot faster and harder to play than most hardcore and aggressive music.”

As a kid, Travis took lessons from Red Shea, Lightfoot’s guitarist in the ’60s, and both he and Dallas remember being backstage at many shows involving Lightfoot and the Good Brothers. Another Lightfoot connection is Margaret’s “Same Old Song” on The Good Family Album: it includes the playing of Terry Clements, the folk legend’s longtime guitarist, from the song’s original demo.

The stars aligned for the Sadies in 2010, when they got to back Neil Young on a recording for Garth Hudson’s compilation A Canadian Celebration of The Band. Since then, the group has toured with Young and has lately performed with Randy Bachman, who’s written a song for the Sadies called “Canadian Garage.”

A collaboration with Lightfoot has, so far, remained elusive, although Dallas and Travis recorded a Lightfoot tribute with Keelor and Rick White, of Eric’s Trip, in a side project called the Unintended. After working with Downie and Pinsent (with whom Travis and Keelor recorded last year’s Down and Out in Upalong), an album with Lightfoot would cap an already stellar career—and complete a distinctly Canadian hat trick. “I already have the perfect title for it—Out of Our Gords,” laughs Travis. “Now, if only we could just rope Lightfoot into it.”