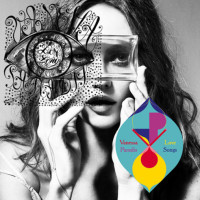 English audiences know her as the former lover of Hollywood’s Johnny Depp, with whom she has two children. But Paradis, who split with Johnny last June after a 14-year relationship, has enjoyed a long career as a model, actress and singer. The French beauty’s latest CD is a double album of 22 songs that take a philosophical look at romance. Says Paradis simply: “Love doesn’t always stay the same.”

Mostly sung in French, Paradis’ songs move freely between ballads and upbeat numbers like the disco-like “Love Song.” English tracks include “The Dark, It Comes,” a dark duet with Carl Barât of British rockers the Libertines, and the slinky “New Year.” The latter, co-written with Johnny and their daughter Lily Rose, features this telling lyric: “The scars will heal and then what will remain/We’re left with a mysterious design/A beautiful reminder of the pain.” Paradis has embraced her past but is moving on.