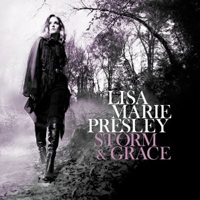 It couldn’t have been easy growing up in the shadow of her famous father. Lisa Marie, Elvis’ daughter with Priscilla, struggled through three marriages to musician Danny Keough, with whom she had two children, superstar Michael Jackson and actor Nicolas Cage. Now happily married to guitarist Michael Lockwood, with whom she has twin girls, the 44-year-old singer has just released the authentic sounding Storm and Grace. Says Presley: “It’s me without any attitude or anger at a time of rediscovery.”

Produced by T-Bone Burnett, Storm and Grace reveals an artist baring her soul and embracing her Southern roots. Mixing country, folk and blues, Presley delivers moody confessionals like “Over Me” and “Sticks and Stones.” Her honesty shines through on “Un-break,” in which she sings, “I got run over by my own parade, I’ve suffocated in the beds I’ve made.” After the missteps of her personal life and two previous albums, Lisa Marie is finally living up to her family name.