Measha Brueggergosman - I’ve Got a Crush on You 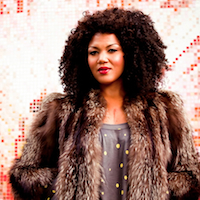 Canadian soprano Brueggergosman is one of the brightest stars of the opera world, with classical performances and recordings acclaimed by critics and conductors alike. But the Fredericton, New Brunswick native is also a glamorous media celebrity. Currently a judge on TV’s popular Canada’s Got Talent, she will soon have a starring role in an upcoming episode of Murdoch Mysteries.

Now, to complete her crossover dreams, Brueggergosman has released a pop album. A collection of 13 standards co-produced with pianist-arranger Aaron Davis, the album ranges from songs by Feist and Ron Sexsmith to Cole Porter’s “Miss Otis Regrets” and the Gershwin title track, which Brueggergosman belts out as a robust blues number. Along with spirituals and traditional songs, the pop diva takes Joni Mitchell’s “Both Sides Now” to new heights and performs a sultry, playful jazz duet with her Canada’s Got Talent co-host Martin Short on “Misty.” “One of my vocal icons is Ella Fitzgerald,” Brueggergosman reveals. It shows.