Her roots are in P.E.I., but Whitney Rose is blooming in Texas. Growing up, Whitney hung around her grandparents’ Charlottetown bar, listening to Dolly Parton and Patsy Cline on the jukebox. In 2011, she moved to Toronto, anxious to begin singing her own country songs. Everything changed when Whitney teamed up with Mavericks’ frontman Raul Malo, who produced her acclaimed Heartbreaker 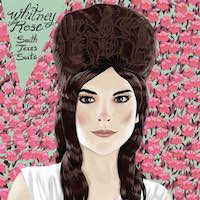 of the Year album and sang with her on a sweet cover of the Ronettes’ “Be My Baby.” Restless to dig deeper into classic country, Whitney packed her cowgirl hat and boots and relocated to Austin in 2015. “As soon as I moved there,” she says, “I fell in love with watching people dance.” She added: “Austin’s such a musical town with so much history, it just lit a fire in me.” Now with a hot new EP, South Texas Suite, and extensive tour dates, Whitney’s inspired sound is taking off—with a distinctly southern twang.