His father is hockey legend Patrick Roy, the Stanley Cup winning the goalie for the Montreal Canadiens and the Colorado Avalanche. And Jonathan seemed destined to follow in his father’s skates—until he caught the music bug. First he appeared as one of the leads in a theatrical production of Don Juan and then fell under the spell of artists like John Mayer. But everything changed for Jonathan when 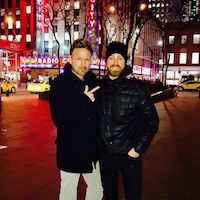 his dad introduced him in 2013 to music icon Corey Hart, who he says inspired him to become a “deeper, more versatile musician.” The “Sunglasses at Night” singer signed him to his Siena Records label and began collaborating with him in the studio. Last year, Jonathan saw two of his songs, the breezy “Daniella Denmark” and the sultry “You’re My Ace,” become hit singles. Now the handsome singer-songwriter has a confident debut album, Mr. Optimist Blues, and a future so bright that he may need sunglasses at night.