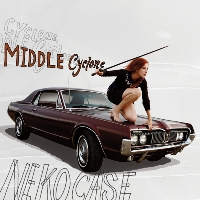 The new album cover depicts her wielding a sword on the hood of a muscle car. What does it represent? Maybe Neko’s personal battle against mediocrity. The Virginian-born honorary Canadian (she cut her musical teeth in Vancouver’s indie scene) never settles for easy formulas. Here, the gifted singer delivers songs about tornadoes, birds and other wildlife. There’s even a chorus of crickets on the album’s closing track. Quirky, yes, but Neko is that rare breed of artist whose beguiling sound must be heard to be believed.

Tweet
Tags:
neko case
Blue Rodeo - The Things We Left Behind
Keyshia Cole - A Different Me