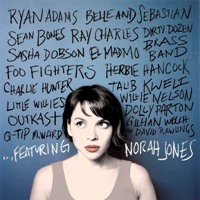 Fame—especially the explosive kind that Norah Jones experienced—can be daunting. Jones’ gentle, jazz-tinged album Come Away With Me sold a staggering 20 million copies in 2002 and swept the Grammys, earning five major awards. The young singer-pianist, who had never previously tasted commercial success, became an instant global superstar at 22. Now 31, the diminutive artist has gone on to release three other albums and appear in several movies.

Yet she remains surprisingly unchanged. “I don’t do confessions,” Jones, the daughter of Indian sitar legend Ravi Shankar, once explained. “That’s the reason I can still walk the streets without disguise. I don’t have to do my make-up or hair before I go out. Once you invite fame in the door, it’s hard to get it to leave.” She’s also refused to be pigeonholed, recording albums more steeped in folk and country music than jazz.

With …Featuring, Jones demonstrates her remarkable versatility. The album’s 18 tracks include past collaborations with icons such as Willie Nelson and current stars like Foo Fighters, ranging from rock to hip-hop. Three of the pairings, with Ray Charles, Herbie Hancock and OutKast, are taken from Grammy-winning albums. Equally strong are “Love Me” and “The Best Part,” two tracks from Jones' side projects with the country-flavored Little Willies and the rock-oriented El Madmo. …Featuring is wildly eclectic, but the singer’s calm, sexy purr holds it all together. Maybe that’s Jones’ secret to keeping grounded: forget the fame—just follow your muse and stay true to the music.